Prolific documentary maker Alex Gibney (Enron: The Smartest Guys in the Room) steers a fascinating film about the Church of Scientology in Going Clear, based on the book by Lawrence Wright. 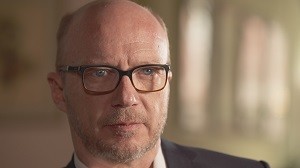 The major talking heads here are the significant figures who have spoken out about the ‘church’ since leaving. Thus we have filmmaker Paul Haggis and actor Jason Beghe, as well as Spanky Taylor, Mike Rinder and Marty Rathbun. Rinder and Rathbun are already well-known for leaving their high level positions in the church and subsequently spilling the beans. But their tales are no less compelling in the retelling.

There are bits and pieces here that I had read about before: ‘The Truth Rundown’ series of articles, the musical chairs story, Tom Cruise’s recruitment video and…well…any of the crazy stories that lurk in the wake of David Miscavage. But it’s so expertly wrapped up in this two hour doco that I never found myself bored.

There’s a surprising amount of footage, particularly of the Scientology rallies and recruitment videos. It’s also surprising to see just how much of Cruise features in the film, considering he presumably gave no permission. There are moments when Going Clear falls into the trap of thinking the audience must be watching moving pictures at all times – showing clips from Eyes Wide Shut when detailing the breakdown of Cruise and Nicole Kidman’s marriage would be one of them – but in the end, it’s the face-to-camera stuff that’s the most impressive. Jason Beghe always sounds a little unhinged (and after spending time in Scientology, who can blame him?) and at times I felt uncomfortable watching his footage. But when I realised he was one of the first significant figures to truly speak out about the church, and I had a new-found respect for the man.

The DVD presentation is slim when it comes to special features. An interview with Gibney is actually really interesting, so it’s a pity that it only runs for about 6 minutes. Then again, bonus features on home media usually comprise documentaries, so having a doco about a doco would be a little strange.

Half the internet has already raved about this Going Clear, so I’m afraid all I can do is echo that praise. It’s a thoroughly absorbing documentary that at the very least will mean you think twice before saying yes to any free personality tests you get offered when walking past the nearest chapterhouse.

Going Clear: Scientology and the Prison of Belief is available now on DVD from Madman.

Going Clear: Scientology and the Prison of Belief