Whitewashing, impossible physics and gold, lots and lots of gold merge in Alex Proyas’ new film, one that was ridiculed the moment the trailer came out in November last year. But you know what? It’s not quite as bad as punters predicted. Obviously you don’t come to a film like this looking for subtlety or nuance, but those wanting a story that makes sense and action scenes that are competently edited can at least expect that here. 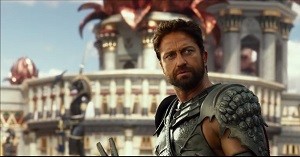 Brenton Thwaites plays Bek, a mortal who joins forces with the ousted God king Horus (Nikolaj Coster-Waldau) in an attempt to take on the nefarious Set (Gerard Butler) who’s doing his best to bring Egypt to its knees. Bek and Horus’ alliance is an uneasy one, and their relationship is actually one of the more interesting parts of Gods of Egypt. If you’re talking about the broad brush strokes that make up the general narrative, they’re quite serviceable.

The performances are uneven, and as with the Star Wars prequels, this is the kind of film that shows us whether certain actors can rise above crappy scripts and poor direction. Coster-Waldau seems to be taking the job seriously, and acquits himself rather well. Thwaites is less adept at overcoming the film’s shortfalls, but I guess he has less experience. Butler, on the other hand, has plenty of experience yet seems only half interested in what’s going on.

The script does few favours for the female characters. Their roles are mostly about showing off cleavage and then dying. Elodie Yung is actually rather good as Hathor, and at least her character gets some moments to shine. Courtney Eaton (Zaya) shows promise but is hamstrung by the script, which permits her to be little more than a damsel in distress.

The visual effects range from the awful to the sublime. Some of the simpler stuff, like the blue screen work, gives the impression that the live action material was poorly shot in the first place. Such moments take you completely out of the film. A lot of the really big stuff, however – epic space battles (seriously), huge monsters – look great. In fact, it’s when Gods of Egypt goes outright nuts that the film actually shines. There are a couple of moments that are stunning in their audacity – Geoffrey Rush’s entrance being one of them – and I could have done with more of this, to be honest.

The film never accurately portrays a sense of peril, however. Lots of people appear to die, but since half of them are gods, it doesn’t take much for them to return to life. But then some of the deaths are portrayed as final, even if…oh, I don’t know…

The accusations of whitewashing are bang on the money, but you know what else was significant about the trailer? 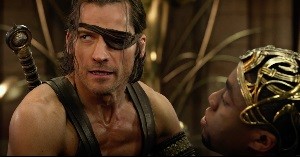 Some time between it and the film’s release, someone – maybe the studio, maybe Proyas, maybe one of the producers – decided that they needed to change the colour grading. As silly as the film appeared in that trailer, the rainbow palette set it apart from lots of other contemporary blockbusters. The film I saw last night, however, featured lots of yellow and lots of black. And that was about it. I was wearing Real D glasses, so this would have contributed, but all the same I’m sure something changed. One of the few things the film had going for it was muted in the last three months.

Gods of Egypt is certainly watchable. This is better than Clash of the Titans or even Percy Jackson. The worst part is that this didn’t even feel like Proyas. I could detect his style in The Crow, Dark City, I, Robot…hell, even in Knowing. This could have been directed by anyone. You’ll be entertained for the duration, even if very little of it will stick in your memory when it’s over.