In the recent resurrection (heh!) of zombie films, there have been the good (28 Days Later), the bad (Dead Creatures) and the average (Resident Evil). Thankfully Dawn Of The Dead well and truly deserves to be in the ‘good’ category.

Dawn Of The Dead has a solid cast – I’ve always enjoyed Sarah Polley’s work, and Jake Weber is particularly good also. It’s also great to see Matt Frewer back in action, after having gone AWOL for some time. (‘Max Headroom’ rocks!) 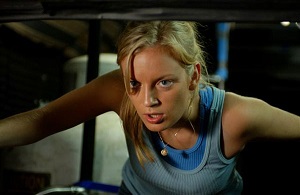 This movie doesn’t play around. There’s very little time spent in the setup, and thankfully the cast don’t spend too much time explaining the stuff we already know from seeing countless zombie films. In fact the first half hour is absolutely fantastic, as it launches into the horror pretty much straight away.

Dawn has a wicked sense of humour. There are certainly some jokes here that I haven’t seen in zombie movies before.

This film does seem to be an advertisement for the NRA – there’s a little too much slow-mo shooting and money shots of guns ejaculating… and heads exploding. Actually I’m surprised that the Monster Magnet song didn’t make an appearance here. Instead we get a very funny cover of ‘Down With The Sickness’ (as well as the original).

The credits sequences in this film are incredible – VERY well made, and in fact the end credits sport a short film in almost its own right.

I have this awful feeling that we’re pretty much at the end of the zombie movie revival, and that all the films from now on are going to be tiring for audiences. We’ll just have to sit back and see how Resident Evil: Apocalypse goes.

Dawn Of The Dead doesn’t do anything new, but boy does it do it well.

Dawn of the Dead