A nice slice of upper class suburban teenage dislocation, The Chumscrubber features a marvellous cast in a film that mixes some warped humour with darker moments of bleakness. 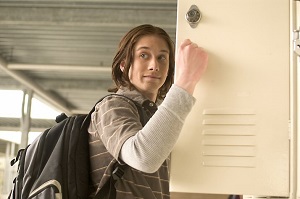 Back when Thumbsucker was released I commented on the similar look and content of the two films, and the fact that The Chumscrubber has been released so late in Australia suggests that this hadn’t escaped the distributor’s notice. Both films feature parents almost oblivious to the trials and tragedies befalling their teenage children, and both are set in ‘dream suburbs’, and even share one of the actors. I’m sure the filmmakers are probably sick of comparisons between their two works by now, so I shall mention it no more.

The Chumscrubber has a rather broad focus as we follow the lives of a dozen or so inhabitants all connected in one way or another. Whilst the kids are at the forefront of the narrative, the adults are just as significant in exaggerated, almost cartoonish ways. There’s the disconnected mayor Ralph Fiennes (Harry Potter and the Goblet of Fire) who seems permanently ‘off with the pixies’ and his bride to be Rita Wilson who’s hell-bent on the wedding going to plan; Glenn Close as the grieving mother sickly sweet on the outside in a kind of Stepford Wives way, but hysterical on the inside; and Carrie-Anne Moss as the sexy mum who does her best to distract her teenage daughter’s male friends. Amidst all this, the teens seem positively sane, even if they’re kidnapping a young boy in the hopes of getting their hands on their dead dealer’s stash. Lead by Jamie Bell (King Kong), the younger cast all deliver fantastically disconnected yet driven performances, from bad boy Billy (Justin Chatwin – War of the Worlds) to conflicted Crystal (Camilla Belle – When a Stranger Calls) and hyperactive Lee (Lou Taylor Pucci).

The overall effect is unfortunately less than perfect. At times The Chumscrubber feels like it is trying a little too hard to be weird or insightful, and the flourishes of magic realism are effective but (like with American Beauty) it feels like Hollywood is only just coming to terms with what ‘European film’ has been doing for ages. Also, with such an ensemble cast the individual characters too often come off as merely caricatures. Glenn Close’s moments lead nowhere and Ralph Fiennes is certainly having a lot of fun – but what exactly is the point?