Let me start by saying that yes, this is one of those films where you think: was a remake really necessary? Of course it wasn’t necessary; it rarely is. But whilst Kimberley Peirce’s new film isn’t flawless, it certainly has some admirable qualities. 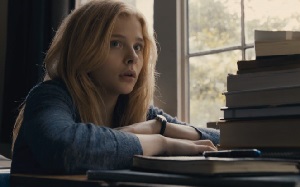 If you don’t know the entire plot of Carrie, you must have been living on another planet for the past 37 years. I’d go so far as to say that the majority of the Western world is familiar with the plot, even if they haven’t seen the original film or read Stephen King’s breakthrough novel. And if you happened to be part of that miniscule minority, then seeing the trailer for this new version would have spoilt the entire film for you anyway.

It was the presence of Chloë Grace Moretz, Julianne Moore and director Kimberley Peirce that got the attention of many of us cynics. Moretz regularly stuns audiences, Moore’s been Academy and Golden Globe-nominated dozens of times, whilst Peirce wrote and directed Boys Don’t Cry. A crappy remake of Prom Night this isn’t.

It’s Peirce’s direction that really makes this film work. Keeping the camera right up in the actor’s faces, she elicits some brilliant performances from all involved. As an analysis of teenage bullying, the film is a masterstroke. Carrie’s high school tormentors aren’t simply evil kids – they range from those who stand by and do nothing, to those who tease in an attempt to be accepted, all the way down to the borderline psychopaths. Lawrence D. Cohen’s and Roberto Aguirre-Sacasa’s screenplay gives us the shades of grey (no, not that kind) that really resonate, rather than simply updating the film with the inclusion of cyberbullying and then patting themselves on the back. (The film does include cyberbullying, but so much more.)

Moretz plays the role perfectly, hunching her shoulders and hiding behind her hair – exactly the type of shy, downtrodden high schooler that we’ve all seen before (or indeed been ourselves.) Moore plays her mother with an uneasy intensity that at first seems over the top, but becomes creepier and more insidious as the film moves along. Special mention should also go to Gabriella Wilde (Sue) and Alex Russell (Billy) , the two kids that actually reach out to help Carrie. Some of their scenes are among the best in the film.

Where this version of Carrie really falters is the final act. It’s not just a case of the audience knowing what’s coming – but this is surely part of the problem – but that we suddenly move into Final Destination territory. Bloody CGI carnage comes to the forefront and all directorial nuance goes out the door. With films like this, where a director best known for working with actual actors makes a film with a high proportion of visual effects, I always wonder if they really have much say in what’s going on. Was it all storyboarded by the experts in the field, with very little input from Peirce? I don’t know. Suffice to say that the climax feels like it was completed by a second unit.

Whilst not a perfect film, the majority of Carrie features some strong storytelling. As one may have expected, they upped the gore and cut out the nudity of the original (like another of Moretz’s remakes), but the heart of this morality tale/tragedy is stronger than ever.

←How I Live Now Ender's Game→