Ca$h is a heist movie of the most complex order. The key player is Cash (Jean Dujardin), a conman who is dabbling in counterfeiting but has something much more elaborate in mind: it involves diamonds, a rival group of conmen and two beautiful ladies – one a cop and the other the daughter of the criminal mastermind Maxime (played by Jean Reno). 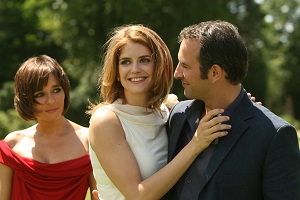 This flick is filled to the brim with double crosses, elaborate robberies and masterful getaways. Unfortunately, it’s severely lacking in character development. All the players here are very intelligent, all have their ulterior motives, yet none are particularly likeable. The acting is fine, yet so many of the characters are lying their way through proceedings that it’s near impossible to sympathise with any of them. In the final moments we get a hint of something a little more passionate, of motives a little more personal, but it’s not enough.

The film isn’t anywhere near as slick as it thinks it is, either. The editing is deliberately tacky – filled with wipes that come with their own sound effects – and the jazzy, funky soundtrack sounds like public domain music rather than written for the film. It’s really surprising how shoddy the production looks at times. It’s set on the Côte d’Azur, so the scenery is glamorous, but the sets/locations have no style – they’re cold and bland.

It’s always a pleasure to watch Jean Reno, and he’s an actor who has progressed effortlessly through his roles as he’s aged, but the characters in Ca$h are only here to double cross one another. If you want to see some nifty narrative twists and turns, then this is for you, but this is the type of heist film that simply doesn’t make sense when you reverse the narrative. Chance plays too fine a part for it to ring true.

This wouldn’t be a problem, of course, if the film were great fun. But it isn’t.