A suave and sophisticated noir film moved from the shadowy backstreets to the broad daylight of a public high school, Brick is as spellbinding as it is original. Rian Johnson’s first feature film is an astounding achievement, and there’s no other film quite like it. 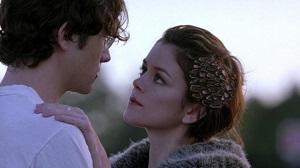 The concept behind Brick sounds just as ridiculous as the ‘children as gangsters’ idea from Alan Parker’s Bugsy Malone, but Johnson’s film plays out almost entirely poker faced. Only once or twice does he let the urge to make fun of proceedings take control, and these are welcome moments amidst all the tension and intrigue.

They’re all here: the dame in peril, the sexy femme fatale, the handicapped mob boss and the gumshoe whose quick wits are bound to put him in the bad guys’ sights – it’s just that they also happen to be teenagers. Joseph Gordon-Levitt heads the cast and the convoluted yet lucid dialogue rolls off his tongue perfectly. From the very first frame he’s drawn into a mystery that will have him chasing after leads and getting pounded on every step of the way. Nora Zehetner is fantastic in her first major film role, as is Emilie de Ravin (The Hills Have Eyes) as the girl at the centre of the mystery. Lukas Haas gets to have the most fun as the local mob boss who runs his syndicate from the basement of his mother’s house.

The cinematography and score set an almost otherworldly mood for this unique take on life in the suburbs. Somehow the bland buildings and pure blue sky make for beautiful images.

The film isn’t quite perfect, there are a couple of redundant moments and a flashback that should have been deep-sixed, but for a debut feature these are negligible. Lovers of film noir should enjoy this, or perhaps more significantly those who aren’t familiar with the genre. It’s a refreshing take on both detective films and teen angst tales, and is bound to become a cult classic.