Imagine for a moment that we’d had a found footage style Blair Witch Project sequel in 2000 instead of the awfully ill-advised Book of Shadows. Would it have been successful? Would it have prompted a yearly sequel cycle, much like Paranormal Activity did almost a decade later? Now that PA has ended, it must have seemed like the perfect time to reinvigorate the franchise that stalled before it even got started. 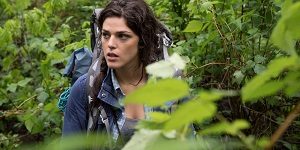 Unsurprisingly, Blair Witch ignores the events of Book of Shadows, and goes back to the found footage genre. A bunch of young people head out to the Burkittsville woods to work out what happened to the original three who went missing. It feels overwhelmingly like a course correction, much like The Force Awakens. A case of, “Sorry about the last film, folks. Watch this and it’ll remind of what you liked about this story in the first place.”

And for the most part, it works. Blair Witch isn’t as raw or low budget as the original, but now we have a decent script with some good character development. Your mileage may vary – the amateurish nature of the first film is what made it such a hit, after all – but I for one couldn’t have sat through an entire film that was as free-form as the first one.

The cast is led by James Allen McCune and Callie Hernandez (soon to be seen in Alien: Covenant) and they do a good job in their respective roles, even if the screaming and panicking goes on just that bit too long. Corbin Reid and Brandon Scott are strong performers too, though the script doesn’t give them as much material to work with. Valorie Curry and Wes Robinson together have an offbeat presence that suits the film really well, and the choice to have a couple of strangers present, rather than simply a group of friends that have known each other for years, is a good one.

Is Blair Witch scary? Well, it’s certainly very noisy. There are moments that set me on edge, but I was just as often wishing the sound system wasn’t quite so loud. In terms of adding story elements to the franchise mythos, the film is much more successful. It expands upon some ideas from the first film, and reinterprets others. The film keeps up the pace, and is never as sluggish as the original.

The flaws? There is a lot of screaming, and yelling out people’s names. After a while, it gets draining. And secondly, this group set out with a lot of technology on hand – GPS trackers, walkie talkies – only to have the script ignore said technology for much of the running time.

Blair Witch won’t set the world on fire, but it’s a capable sequel with some very effective sequences. It builds on the ideas of the first film and is certainly capable of reigniting the franchise. Most importantly, I liked these people, which is more than I could say for the (admittedly much creepier) original.