I’ll start off by saying what almost everyone else has said about this film: it was nowhere near as bad as I thought it would be. Firstly there was the fact that it took such a long time to be made (I have seen Sigourney Weaver saying that she insisted upon the ending of Alien3 because she’d heard about plans for AVP). Then there was the cast list of nobodies. And finally there was the recent Freddy vs Jason which I feared would set the tone for this kind of film. 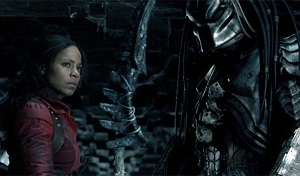 So, AVP is better than expected. The script is dodgy, and it seems that almost all of the dialogue is expositional. Unfortunately the characters aren’t in the position of having six films worth of information at their disposal – they know nothing of these creatures. Thus there is a lot of time devoted to them putting the pieces together.

There are few surprises here. While this film is rated M in Australia, it certainly pushes the boundaries (even if there were some obvious decisions made to keep the rating as low as possible).

The creators have shown a modicum of respect to both series. There is some slight rule breaking here (the aliens’ tails seem to be a lot longer, and they’ve sped up the gestation period), but, again… it could have been worse. Most importantly the events in this film shouldn’t affect any future Alien movies (I doubt that there will be any Predator films in the near future – especially considering Predator 2 was a piece of crap). I must admit to being a big Alien fan, and most of the time I was barracking for them rather than the Predators.

With regards to the actual fights between the creatures, AVP is a sci-fi fanatic’s wet dream. The fights are awesome, even if half the time we have no idea what is going on. (I won’t devote much time to complaining about the editing style – I’m sure Mark will do enough of that for both of us.) The special effects are fantastic. Admittedly a lot of the film takes place in the dark, so the animators can get away with quite a bit, but it looks great all the same.

I am sure that AVP will be enjoyed by Alien and Predator fans – everyone else may find it fun, if mindless, entertainment.