I feel I should point out that I was never particularly enamoured with Raimi’s Spider-Man films. The first and second one were OK but nothing more, and the third one was some kind of weird emo comedy musical, as far as I can remember. So you should take this into account when reading my review. If you felt a special affinity to that iteration of the webslinger, then you’ll find the notion of a reboot a mere five years later an affront from the get go.

I, however, quite enjoyed The Amazing Spider-Man. The main problem is that we’ve seen it all before. Hollywood has been educating the general public of late about comic book storytelling, and now that The Avengers made megabucks despite the fact that it was part of a multi-film narrative preceded by five prequels, you’d think that people could appreciate a new take on Spider-Man without having to go back to the beginning again. That being said, The Amazing Spider-Man handles the origin story with aplomb. There are various differences to the Raimi version along the way, but really the main distinction is that it features Gwen Stacy instead of Mary Jane Watson.

Of course, it comes as no surprise that Emma Stone is brilliant here. After handling the masterfully witty teen comedy Easy A, this must have been a walk in the park for the talented actress. Similarly, Andrew Garfield is more than up to the task as Peter Parker. Despite the fact that he’s about 12 years too old for the part, he performs wonderfully in a role that ups both the level of geekiness and wisecracking in comparison to Tobey Maguire’s portrayal.

Most importantly, the chemistry between Peter and Gwen is stunning. Considering Mark Webb’s previous film was (500) Days of Summer, I guess we shouldn’t be too surprised that it’s the love story aspect of the film where his work really shines. The scenes between our two leads feal really organic, and it’s wonderful to see their attraction grow as the film progresses.

Where the film falls flat is in the supervillain department. I can’t help but feel sorry for Dylan Baker, who played Dr Curt Connors in Spider-Man 2 and 3, effectively waiting in the wings for a transformation that never occurred. Rhys Ifans is more than up to the task and is quite effective in the role up until the CGI takes over, however Connors’ tale is completely uninteresting with zero surprises along the way.

The visual effects are decent, and certainly much better than the awful ones that featured in Raimi’s films. Spidey still looks rubbery when he’s swinging through the streets, however, so I guess it’ll be a while before we see a Spider-Man film that even attempts to approach realism in the realm of VFX. James Horner’s soundtrack has some great moments, with one or two tracks that really stand out.

The Amazing Spider-Man is less than the adjective suggests but is still a decent film. The emotion is palpable and the Gwen/Peter romance is handled skilfully. As with many of the Marvel films (Iron Man, The Incredible Hulk, Captain America), it’s the climactic scenes that fail to impress. It almost made me wish the film didn’t even feature a supervillain.

Admittedly, I was critical of the utterly redundant American remake of the far superior Swedish version of The Girl with the Dragon Tattoo, and it has been only ten years since Tobey Maguire and Sam Raimi rebooted Spider-Man in their 2002 film. Despite this, writers James Vanderbilt, Alvin Sargent and Steve Kloves and director Marc Webb do just enough to avoid this newest version of the webslinger’s antics seeming like a complete waste of time.

Peter Parker is entrusted to the care of his aunt and uncle as just a boy, and the final image of his parents leaving him behind stays with him for years. With the guidance of Uncle Ben he becomes an intelligent and noble young man, someone who will intervene in schoolyard bullying even if it means getting his own arse kicked. 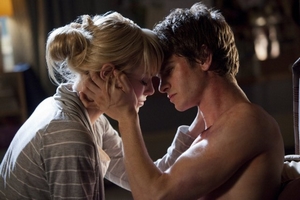 His curiosity at what caused his parents to abandon him will drive him closer to Oscorp, however, where an unfortunate encounter with a genetically enhanced arachnid will give him the powers he needs to make an even larger contribution.

The really striking thing about this very early reboot of the Raimi film is that audiences are given just enough to differentiate the films and thus continue to care. Much of this is down to the attention lavished upon the two lead characters: Andrew Garfield as Peter Parker and Emma Stone as Gwen Stacey. That it is almost possible for viewers to forget they’re watching a comic book / superhero film and get drawn into the drama and romance of these two teens as they try to establish their own identities is quite remarkable.

Garfield is excellent in the lead role, and is matched beautifully by Stone as his paramour. Maguire and Kirsten Dunst certainly seemed adequate, but both are outmatched by the performances of these two relative newcomers. Sure, Garfield nailed his role in The Social Network, and Stone has been earmarked as someone to watch for some years now, but the assuredness with which they manage their performances suggests great skill.

Supporting turns by Martin Sheen, Sally Field and Denis Leary are all excellent, with Sheen particularly making the most of his time on screen. His ability to suggest the contradictory qualities of strength and fragility, and perserverance amidst heartbreak, really allow his Uncle Ben to achieve an emotional resonance I never felt with Cliff Robertson’s take on that character in 2002.

Where The Amazing Spider-Man doesn’t quite work is in the bad guy department. As Stuart has mentioned above, Rhys Ifans does his best but his transformation from Dr Curt Connors into The Lizard doesn’t quite cut it, and the battles between Spider-Man and The Lizard are probably the low point of the film.

If one accepts that Spider-Man needed a rebirthing, The Amazing Spider-Man is a pretty fair attempt. It won’t please those only looking for an update to Spidey’s wall-climbing and swinging from buildings schtick, as it spends far more time on character than one might expect. For anyone prepared to enjoy the excellent performances of a strong cast, however, there just might be enough here to satisfy.

←The Cabin in the Woods The Dark Knight Rises→