The second Department Q film, The Absent One, hits the ground running, with a confidence that wasn’t immediately apparent in The Keeper of Lost Causes (Kvinden i buret). You’d think that Carl (Nikolaj Lie Kaas) and Assad (Fares Fares) would have a bit more respect from their bosses, considering the decent work they put into their last high profile case. But as luck would have it, Carl’s being as obstinate as ever. Instead of focussing on the pile of cold cases they have waiting for them in Department Q, he’s fascinated by a case that was considered solved 20 years ago. But it’s clear something shifty went on back in the 90s. The culprit got off lightly, and the case itself points to the involvement of some high profile figures who have reason to keep the truth buried. 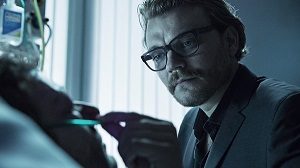 The Absent One doesn’t have the same race-against-the-clock narrative that The Keeper of Lost Causes had, but of course our leads are still kicking against the pricks because, well, it just wouldn’t be the same if they had the full support of their workplace, would it?

This is a slickly produced film. It looks and sounds great, the pacing is perfect the editing is impressive. The colour palette is consistently pretty – dark when it has to be, colourful at other times – and it looks great on DVD (alas, it’s not available on Blu-ray.)

There isn’t anything breathtakingly original here, however. This is a standard mystery/thriller, with emphasis on the thriller part since we’re often a step ahead of our two detectives. Disappointingly, the story is very traditional in its presentation of female characters too. By this I mean the only women present are assault victims, drug addicts, prostitutes or otherwise “fallen” women. The only strong or vaguely positively presented woman is, well, Carl and Assad’s secretary. It’s depressing that, in this day and age, the crime genre is still steeped in conventions such as this.

I’ve grown to like Kaas’ performance as Carl a little more this time around, and once more Fares steals the show with an effortlessly charismatic performance as his more sociable offsider. The world of cinema needs more Fares Fares.

I’m keen to see 2016’s follow-up, A Conspiracy of Faith (Flaskepost fra P), though it would be nice if the stories were able to step out of the generic and into something a bit more progressive.

The Absent One is available now on DVD from Madman.