That’s right: the gang’s all here. Once more Christopher Guest et al have bought us a mockumentary focussing on a quirky subculture. This time it’s folk music. (Something of which I know absolutely nothing, apart from David Bowie’s early work.) Everyone that’s ever worked with Guest, from Spinal Tap to Waiting For Guffman to Best In Show is here – and a few more. It’s quite ridiculous how many recognisable faces are present here. 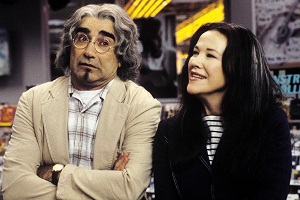 A Mighty Wind starts off with a bang. The first few scenes are absolutely hilarious, and I remember thinking that this was definitely the best of the series of mockumentaries. But this soon tapered off, and I remember that this happens in every one of these films. The jokes are further and further apart, and by the end of the film the plot has well and truly taken precedence over the comedy.

This is a problem with comedies, and why so many fail. You can keep up the jokes all the way through a feature, but audiences often get tired of laughing (Monty Python And The Holy Grail is a good example). More often the laughs die down as the plot gets a little serious.

A Mighty Wind is entertaining nonetheless. All the actors here are in fine form, and Guest himself is truly a master of disguise – you only need to compare his characters from the mockumentaries with The Princess Bride’s Count Rugen. Unfortunately Parker Posey has quite a small role in this film, but there are so many roles that it’s understandable that this would happen.

We are presented with pretty much the same technique as the previous films – it looks like a documentary except every now and again cameras appear in places they shouldn’t. The actors seem to be ad-libbing in the same manner as the previous films, and it’s truly wonderful to see such an incredible bunch of talented actors in the one place.

Special mention should be made of Eugene Levy, who for the first time (that I can think of) plays a different character to his standard one that appears in Best In Show, American Pie and others. He is truly incredible in this film and definitely a highlight.

A Mighty Wind is pretty much of the same standard as Best In Show and Waiting For Guffman. If you enjoyed them then you’re bound to enjoy this.