Thanks to the Golden Age of television, Veronica Mars has had a fourth bite of the cherry. After season 2, the show had to switch networks, then came to a sputtering conclusion when it was cancelled. Seven years later, we got the Kickstarted film. And now, five years after that, we get a fourth season. Us marshmallows really can’t complain; even ‘Firefly’ only got one second chance. 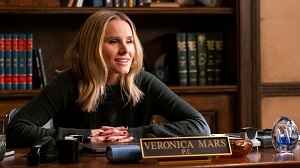 The show’s format has morphed several times over the years. Season 4 is basically a 7-hour movie: a completely serialised eight-episode story. Here’s the biggest difference, however: where the film was unashamedly fan-servicey, season 4 is about giving the audience what they need, not what they want.

I think people who only ever dipped their toe in the show missed out just how broken Veronica (Kristen Bell) is. That was always my favourite part of the show: the darkness hiding behind her bubbly persona. And it’s just as well, because this season really dives into that aspect of her personality. Here is someone who was raped, and her best friend killed, all before her 17th birthday. She’s been clenching her fists ever since, and it’s definitely taking its toll. Like all noir protagonists, Veronica continues to be the instrument of her own demise – don’t expect that to change anytime soon.

The most enjoyable part of this season? Watching Veronica and her dad work together as equals. She may have gained her PI licence towards the end of s3, but this is the first time we really see them working side by side as co-workers, spit balling ideas and challenging each other’s theories. The most surprising part of this season? Seeing a different, more mature Logan (Jason Dohring) who, miraculously, doesn’t feel neutered. I never thought a post-therapy Logan would be an effective character, but Rob Thomas, Diane Ruggiero-Wright and others have shown me just how good they are at writing characters that truly evolve.

There are a lot of returning faces, but unlike the movie, it never feels like overload – people show up in places that make sense. Poor old Wallace (Percy Daggs III) is again only peripherally relevant, and my one wish is that he gets a more prominent role if we get another season. The guy’s been on the sidelines since s3.

The mystery concerns a bombing in Neptune during spring break. 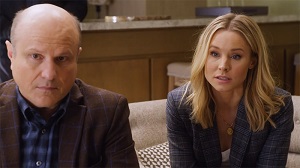 As usual, the story is full of twists and turns, and the list of suspects is long. J.K. Simmons, Patton Oswald and Clifton Collins Jnr are the big-name additions to the cast, and both are predictably excellent. Mido Hamada plays a congressman embroiled in the mystery, and his character is the only misstep. Throughout the season, his actions make little sense, and his motivations flip-flop depending on the needs of the script.

My only other complaint is far from integral. Visually speaking, this looks nothing like the first three seasons or the film. This show always had a California-noir thing going on, with lots of exaggerated colours – neon lights, stained glass windows – that served to exaggerate the shadows lurking in the corners of Neptune. This season, however, offers nothing but flat and bland lighting. It’s weird considering TV these days is just as stylish as feature films – if anything, the visuals are less impressive than the previous incarnations.

There’s been a subtle shift here too. 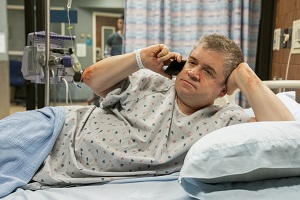 As you’d expect, Veronica and Logan’s relationship is different to the early years. The writing is less soap and more kitchen sink (at least in the first half of the season) and there are a several arguments between them that play out quite realistically. As someone who seems to have come through the other side of trauma, Logan is the only one who really understands how broken Veronica is, and like I said before, her flaws have never been focussed on this much before.

As a character study, this season offers some of the best writing the show has ever seen. The central mystery won’t have the watercooler edge that s1 did, but the drama will definitely remembered by fans for years to come. If you’re someone who lost interest some time in s3 or perhaps when the movie came out, I can assure you that this is a much more confident run of episodes. We fans are in an incredibly lucky position – we love the show as much as the central cast do, and Kristen Bell has said time and again that she’s prepared to return to this character for as long as she’s on this earth. Not only that, but creator Rob Thomas has shown he’s adaptable to whatever format is going (serialised network TV, case-of-the-week TV, feature film, books and now streaming TV). Long may Veronica continue.

←She-Ra and the Princesses of Power Season 3 Rambo: Last Blood→