In my review of the first Robotics;Notes collection, I said that the success of the show as a whole would depend upon how well it combined all the disparate story strands in part two. Unfortunately, the phrase “not very well at all” is what comes to mind after catching up with the second half of the series. 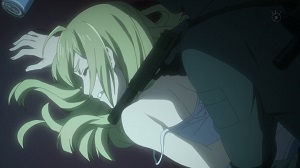 The Robot Research Club is still desperate to finish their giant robot, Kaito is still trying to solve the mystery of the ghostly AI and there’s the constant threat of solar flares looming over proceedings. If the first part of the show impressed by keeping so many plates spinning simultaneously, in part two they all fall to the ground and smash unceremoniously.

It’s hard to shake the feeling that the writers were making this all up as they went along. Early on in this collection, we have a robot uprising which sees everyone’s domestic bots walking out onto the street and rioting. Except I don’t remember this show previously explaining that everyone had domestic robots in their households.

On the other hand, Episode 16, “I Love Giant Robots,” features the departure of a secondary character, and the seven minute scene leading up to that shocking turn of events is truly spellbinding. It was a scene that really made me sit up and take notice, and it was handled perfectly. The only problem was, I never understood the significance of that character in the overall narrative, and I hadn’t felt anything for her before that moment.

There are a number of examples that, in isolation, are quite impressive, but on the whole the story simply doesn’t work. It feels like a first draft, or indeed the result of a brainstorming session in the writers’ room, rather than a master plan coming together. Coming, as this did, in the wake of the immaculately plotted Steins;Gate, this comes as a real disappointment.

By the time the antagonist was revealed and their evil scheme laid bare, I simply didn’t care. Any foreshadowing was haphazard at best, whilst the tone shifted drastically from episode to episode. Once I reached the final two episodes, I was struggling to care about what was happening.

Perhaps suffering from the weight of expectation, Robotics;Notes Collection 2 doesn’t deliver on its potential.

Robotics;Notes Collection 2 is available now on Blu-ray and DVD from Madman.