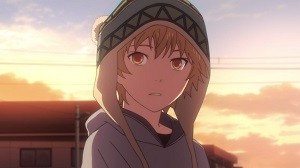 Yato (Hiroshi Kamiya) is a small-time god who grants wishes for the paltry sum of 5 yen. Cleaning your house, looking for your lost cat – this is the kind of work he lives for. When his Regalia (a kind of spirit/weapon) quits, he finds himself without the proper tools for his job. Hiyori (Maaya Uchida) is a teenage schoolgirl who is in the right place at the right time when a distracted Yato wanders in front of traffic. She saves his life, but as a consequence of the connection that she makes with him, she half-slips into the spirit world (known as the Far Shore.) Soon Yato enlists the help of wandering spirit, Yukine (Yūki Kaji) to become his next Regalia, and the central trio of this TV series is complete.

As an urban fantasy, Noragami has some great ideas. Yato is a former god of calamity, so whilst he wanders the streets doing odd jobs dressed in a simple tracksuit, we know that he’s harbouring a dark past. Hiyori has to manage her new ability to slip between the Near Shore and Far Shore at the blink of an eye, whilst Yukine is secretly raging against his own death, and desperately wants to re-join the living. These are all interesting side-plots, but Noragami deals with them one at a time, in an almost arbitrary manner.

There are all sorts of other gods prowling the streets, invisible to the populace. Tenjin (Tōru Ōkawa), god of academics; Kofuku (Aki Toyosaki), god of poverty and Bishamonten (Miyuki Sawashiro), god of combat all have distinctive Regalia and varied approaches to their work. Their dislike of Yato is pretty much the only thing they have in common.

There are flashes of brilliance here and there. Yukine’s desperate yearning to return to the land of the living is wonderfully painful to watch, whilst Yato’s determination to rarely ever give a straight answer makes him both comedic and enigmatic. Hiyori is the character that gets the raw deal, however. Apart from taking the role of the viewer, being introduced to the world as the series unfolds, we don’t get a sense of what her wants and desires are. The writing makes her frustratingly passive, also. It’s as if she’s simply along for the ride. 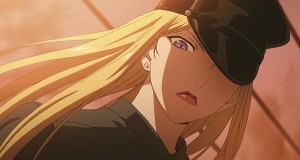 The funniest episode sees the characters spending a good eight minutes falling from the top of a skyscraper, arguing the entire way, whilst another sees Yato putting a boxcutter in the hands of a teenager who dreams of fighting back against the school bullies who make his life a living hell. The character models are realistic, and yet we sometimes get the most bizarre of wild takes. Being able to go to such ridiculous extremes is impressive, but the narrative doesn’t flow very well, so it’s a bumpy ride.

The animation standard is fantastic, and the action particularly striking. The DVD comes with commentaries by the English voice cast, which are entertaining as always. One episode even features a video commentary, which means we get to see the actors enthusing over their adaptation.

There is a second season of Noragami that began screening in Japan a month ago, and I’m keen to see where it takes the show. As it currently stands, it’s an interesting anime boasting some great ideas. It isn’t a must-watch, however.

Noragami Series Collection is available now on DVD from Madman.