You, Me and Dupree suffers from a disappointing advertising campaign that misrepresents its product, and will leave many viewers disappointed that they aren’t seeing the Owen Wilson they know and love, rather than the new and improved comic with a heart of gold. Comparisons with the similarly poorly marketed Click are obvious, and yet the number one position Dupree holds at the local box office suggests not even word of mouth can offset the power of marketing dollars. 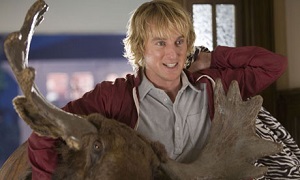 Wilson is Dupree, the life of the party screw-up whom everyone loves, although not if he is sharing their home, as best mate Carl Peterson (Matt Dillon) and his new wife Molly (Kate Hudson) find out, ‘with hilarious consequences’… not. The trailer spoils much of the ‘comedy’ in the film, and what remains is truly a rather dull attempt at drama, disguised as a story of redemption.

Dupree is charming in Wilson’s usual way, but Dillon and Hudson are unlikeable as the real stars of this film; Dupree’s story is provided as a comic relief counterpoint to the crisis that engulfs Carl and Molly. Wilson never fails to be watchable, but he struggles with some inadequate plotting and intangible motivations – his sub-plot about cycling and Lance Armstrong is left unfinished and thus purely a distraction. Dillon fares a little better, with Carl given some real issues to work through, although some of the challenges he faces, in particular those involving his father-in-law and boss (Michael Douglas), are quite banal, and his decline into madness is never particularly well handled.

Hudson and other supporting cast including the reliable Seth Rogen, who supported Steve Carell in The 40 Year Old Virgin to similarly amusing effect, try to maintain the momentum, and none are particularly bad, but the material they are forced to endure limits their impact.

There are occasional moments of fun, but truly the advertising will have a lot to answer for in the minds of many of the audience – where are the side-splitting laughs we were promised, they will correctly wonder, and once again it seems that greed for the dollar rules over artistic merit. For, while You, Me and Dupree is somewhat confused about what it is attempting to be, its marketers have sold it as another in a long line of romantic comedies featuring Wilson, Vince Vaughn (whose recent The Break Up suffered from similarly false advertising), Ben Stiller and others, when it clearly fails to be either romantic or comedic.

Whether the recent trend of films including You, Me and Dupree, The Break Up and Click is a portent of a wide-ranging desire of Hollywood comics to gain credibility with ‘dramedy’ remains to be seen, but on the level of evidence provided so far it seems unlikely they will succeed.

You, Me and Dupree