One of these days we’re actually going to get a Darren Aronofsky-helmed comic book movie. We came so close to seeing his take on Batman: Year One and then The Wolverine, and both times he departed during preproduction. Here, his replacement is James Mangold, a director who has been responsible for some brilliant films in the past (Cop Land, Girl, Interrupted, Walk the Line) and some not so brilliant films recently (3:10 to Yuma, Knight and Day.) 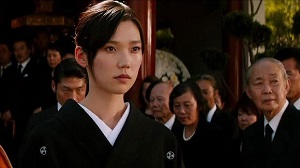 The hope that everyone had was that The Wolverine would be better than X-Men Origins: Wolverine. I’m not so sure it is. This time around, Logan’s drawn to Japan at the behest of a man whom he first met back in the Second World War. Yashida is the head of a multinational company with millions of dollars at his disposal, and he has a proposition for Logan.

Unfortunately, the concept of ‘Wolverine in Japan’ is about as exciting as this film gets. Sure, we have some cool stuff happening but it’s kind of like they threw up all the ideas they could think of on a whiteboard – Nagasaki! Ninja! Ronin! Bullet train! Honour! – and failed to put them together in a coherent manner.

Sure, Jackman does a good job keeping focussed, but the plot is convoluted and uninteresting. The villian’s evil scheme doesn’t seem to make a hell of a lot of sense, and there’s a lot of double-crossing going on; so much so that, when you unravel the plot in reverse, it simply doesn’t fly.

Despite her striking appearance, Rila Fukushima doesn’t seem to have the presence required to play the enigmatic Yukio, and the script demands her to be a bit of an emotional yo-yo. Tao Okamoto does a better job as Mariko, the granddaughter of Yashida, whilst the villainous Viper (Svetlana Khodchenkova) seems positively pantomimic, as if no advances have been made in the comic book movie genre since 2000’s X-Men.

The action is so-so. There are some moments that are fine, whereas some others that are more concerned with editing out any blood or gore than showing us a good time. An M-rated superhero movie is a fine proposition normally, but when you’re dealing with a superhero that has foot long blades that pop out of his knuckles, not seeing any blood is a little ridiculous.

The same goes for the visual effects. Some scenes – usually the quieter moments – amazed me with the advances that CGI has made over the years, whereas a couple of the action scenes look nothing short of awful, almost as if we’re still looking at the pre-effects workprint.

I’m not sure why it’s so hard to make a decent solo outing for Wolverine. Common sense tells me that he works better as part of a team, yet I’m sure there are hundreds of comic-book fans that could point me in the direction of some excellent solo stories that have been written featuring him over the years. The main problem with The Wolverine is that there’s no clear character arc for our hero. He goes to Japan, stuff happens. Sure, they hint at some character development, but for the most part it feels like it’s been watered down through successive drafts of the script.

The Wolverine is far from the likes of Batman Begins or Iron Man 3, nor is it even as good as middling to strong efforts such as X-Men: First Class. It mightn’t be as boring as X-Men Origins: Wolverine, but it’s a mostly silly, uninspiring film.