You’d think the cast would ensure that this be a great film – Seth Green, Matthew Lillard and, um, that other guy. And the rapport between these three is certainly great, it’s just the script that lets down Without A Paddle. 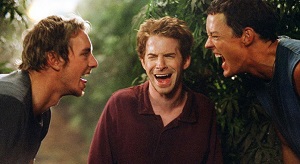 Whenever Without A Paddle tries to be funny, it works. There are some truly hilarious moments in this comedy, many of which are solely provided by the actors’ demeanour. But a huge chunk of this film is bogged down by soppy sentimentality and wretch-inducing pathos.

Who really cares about a heartfelt plot in a movie like this? Was it really necessary to instill a Disney-like tale of friendship and growing up? If I wanted that I could have hired White Water Summer from back in the day. There was no need whatsoever to send this film up shit creek (heh).

The idea of three losers stuck out in the bush is a great idea, and when you’ve got talent like this, it sounds even better. There are some genuine laughs, from the drug induced hijinks to the ridiculously homophobic wacky behaviour.

If there’d been more laughter and less ’emotional growth’, Without A Paddle would have been great. Instead it’s merely entertaining.