This is one of those movies for which the Hoopla Factor was created, for as brilliant as The Witch is, I can’t tell you that I loved the film. 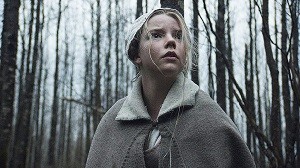 The story concerns a family of Puritans living in New England in the 17th Century. Cast out from their village, they live on a small farm on the edge of the woods, struggling to survive. When one of their children goes missing, they begin to descend into a spiral of paranoia, fear and guilt. Guilt is of course the operative word. These folk live by the concept of original sin, and the problem seems to be that when things don’t go their way, they decide that they should pile on EVEN MORE GUILT. It’s clear from the outset that this isn’t going to end well.

As a study of repression and religious fervour, The Witch is exemplary. The old English dialogue feels authentic, the performances are stunning in their conviction, and Robert Eggers’ direction is pitch perfect. Incredibly, I felt for these people too, because I could see how they were struggling to live their lives in a manner which was consistent with their concept of morality. Ralph Ineson’s patriarch is struggling to hold the family together, working himself to the bone, whilst his oldest daughter, Thomasin, is given life courtesy of a revelatory performance from Anna Taylor-Joy.

The film has an authentic visual style, and the bizarre 4:3 presentation is rather distinct in this day and age. I fear that any television screenings would be subjected to some hastily assembled black bars on the top and bottom (just like that ridiculous HD ‘Buffy the Vampire Slayer’ presentation that’s occurred in recent times) but since a square ratio is so rare these days, I actually found it quite appealing.

The big disappointment with The Witch is that, for me, it wasn’t the least bit scary. This perhaps wouldn’t be so frustrating if all the publicity surrounding the film hadn’t been so incredibly complementary about the film’s creepiness. The film certainly manages to build tension, but it all too often dissipates.

I wouldn’t say that The Witch is one note cinematic experience, but it doesn’t shift gears. I kept waiting for something that never happened. I was expecting to be shocked, like The Wicker Man (or its pseudo-remake, Kill List) but instead the film simply ended.

I can recommend The Witch for discerning horror fans or those interested in a dark period drama. A mainstream audience is likely to be unimpressed, whilst those expecting to have nightmares for weeks will be sorely disappointed. This is a powerful tale well-told, but I can’t say that I’d rush out to see it again.