Wimbledon tries hard to fill the void of good tennis films, but unfortunately it is so mired in jingoism and racism, it fails to win me over.

Whilst setting itself firmly as a romantic comedy, this film follows the long line of British romcoms, (including Four Weddings and a Funeral, and Notting Hill), that star a bumbling male British lead, entranced by an arrogant, confident, American female. Whilst this startling cultural inferiority complex may equate to amusement for British viewers, I am getting tired of it. We’ve also recently had Love Actually playing up to this with the ‘showdown’ between Hugh Grant and Billy Bob Thornton. I’m not sure why the Brits must continue making films about Americans being better than them – did their rebellion so many hundred years ago really hurt your egos that much?? The other subtext of racism against Americans is none too subtle. Every American character is a boor – Dunst, Neill, Favreau, McEnroe all play demanding, over-confident, smarmy roles. I wonder if McEnroe even realised he was being played – his role demands him to poke fun at himself, but in the end he just doesn’t seem to get it. On the other hand, Bettany is the charming bumbler, much in the Hugh Grant mould. His parents, the British crowd, even the hotel staff and ballboys, are restrained, polite and supportive.

This film is clearly a direct response to the trials and tribulations of Tim Henman, and the way the British public get behind him every year for Wimbledon, hoping he can break the long-standing run of English failures at The Open. It succeeds in its appeal to our sense of the battler, the underdog. Were it less manipulative, I might feel more charitable toward it, but I’ll admit I was really rooting for Bettany’s character to succeed. Sure, I felt dirty afterwards, but after that level of manipulation I was always going to.

The romcom component? Well, I have to admit that I still kind of see Dunst as a child, and this left me with a certain discomfort, watching her sexualism and relationship with Bettany, a man 11 years older than her. I’m not sure why this struck me more than in Spider-Man 2, for example, but I was distinctly uncomfortable. This felt very different to many films with relationships between older men and younger women – more like Lolita than Pretty Woman.

The tennis? This is one of Wimbledon’s real strengths. The on court action is shot with great camera angles and impressive SFX. Although using well-known commentators, this is a new experience, and was very enjoyable indeed.

Bettany is a star, and his performance is the real shining light. He is charming and self-effacing, and I would not be surprised if Bettany can usurp Grant as the British romcom lead du jour.

Wimbledon is a disappointing mess of jingoistic appeals to British pride, and failed romantic comedy. There are some happy moments, but overall they are swamped by the negative.

I actually intended to see The Bourne Supremacy when I went to the cinema the other day. Unfortunately the projector was broken down, thus I was given a free ticket to Wimbledon. This wasn’t such a bad deal since I had been considering to see this film anyway (although of course I didn’t tell the ticket seller this). 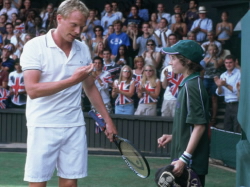 Bettany and Dunst are certainly Wimbledon’s main strength. I thought their love story worked rather well, and I liked Bettany’s character particularly. Dunst actually got a chance to act here also, and although it was by no means unfamiliar territory for her, at least she had more to do than in Spider-Man and Spider-Man 2. The supporting cast of characters was pretty pathetic. Their stories were simplistic and cliché-ridden, and the talents of Sam Neill and Jon Favreau were pretty much wasted.

The tennis scenes in Wimbledon are fantastic. These truly manage to capture the excitement of the game (however exaggerated), and thankfully don’t overly resort to fancy, Matrix-style special effects. Both Bettany and Dunst look like they knew what they are doing, and they are suitably scruffy and sweaty during the games. (There’s nothing worse than actors looking perfectly made-up when they’re supposed to be participating in strenuous exercise. And yes, that includes the severe lack of bed head appearing in films post coitus).

Mark’s little rant about imperialism and America-bashing wasn’t evident to me at all. I thought there was only a slight amount of attention paid to the cultural differences between the two countries, and felt that overall the writers held back.

The cinema was practically empty, so it’s hard to be certain that the lack of laughs was a failure on the part of the film or not, but a number of the jokes certainly fell flat.

A decent romcom with nothing particular novel to say, but enjoyable nonetheless.

←Plots with a View Spring, Summer, Autumn, Winter... and Spring→