Want to hear a sad story? No? Too bad… 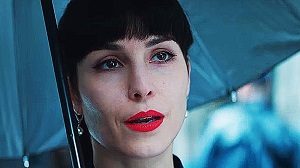 The first time I saw Dead Snow (Død snø), it was glorious. It was at the Melbourne International Film Festival, a midnight screening with a cinema full of horror fans who thought the idea of zombie Nazis was absolutely brilliant. And we weren’t disappointed. There was laughter. Cheering. A general good time was had.

Then, a couple of years ago I rewatched the film on Blu-ray. It was not good at all. Somehow, it had become a poorly-paced, amateurish comedy horror that had very little to offer aside from the enthusiasm of the filmmakers. Dead Snow 2: Red vs. Dead (Død snø 2) was even worse. And Wirkola’s first Hollywood film, Hansel & Gretel: Witch Hunters was nothing but a wasted opportunity.

But what we have here is a Wirkola film that finally achieves its potential. Set in the near future, where overpopulation has led to the installation of a one-child policy wielded by a totalitarian government, What Happened to Monday? sees a group of septuplets secretly living under the one identity. And it’s a lot of fun. (For the viewer, that is, not for the sisters… They’re having a rotten time, obvi.)

The film being two hours long, we don’t get a sense of the differences between these sisters, aside from the way they dress. Sure, there’s the quiet and geeky one, the sporty one and…the…blonde one, but we never go any deeper than a Spice Girls level of characterisation. But none of that matters when the story moves at such a fast clip, pausing only to offer some excellent moments of tension.

As critical as I was of his earlier films, Wirkola really does know how to stage an action scene. Sure, his characters fail to tap into my emotions, but his ability to establish a perfect pace and tone during the action is on par with Neil Marshall.

Willem Dafoe and Glenn Close also appear, though neither have to work very hard for their paycheque. The near-future world we are presented with is reasonably close to present day, so it’s an easy sell. And at the centre of it all is an interesting premise: just how would seven sisters go about pretending to be the one person in a totalitarian regime that keeps track of each its citizens’ movements?

The DVD comes with interviews, a making-of and FX breakdowns. As you’d expect, the film features some nifty scenes of Rapace interacting with herself, and we’re at a stage now (as evidenced by ‘Orphan Black’) where it’s near-impossible to spot the seams in such comp work.

What Happened to Monday? is a fun, breezy thriller that doesn’t try to be high art. It’s Wirkola’s most accomplished film so far, and Rapace is clearly having a ball. Cliché abounds, but there are also some twists that subvert expectations. Recommended.

What Happened to Monday? is available now on DVD from Madman.

What Happened to Monday?