While the title of Philippe Lioret’s newest film suggests a kindly greeting, Welcome will disturb and dismay most of its audience with its utterly bleak portrayal of the plight of illegal immigration in France. That its downtrodden and disaffected characters are so powerfully performed is its major strength, although its uncompromising vision is the most striking memory many will retain.

Vincent Lindon is Simon, a former French swimming star who now spends his days as a lifeguard and instructor at a local community swimming centre. He is in the middle of a divorce, with his wife frustrated by his refusal to entertain any political or controversial ideology, despite their home of Calais being at the forefront of an illegal immigration crisis. When a young Iraqi man (Firat Ayverdi as Bilal) begins lessons in the hope of swimming illegally to Dover, Simon must balance his admiration for Bilal’s determination with his own desire to avoid trouble.

It is hard to imagine anyone watching a film like Welcome and coming away unmoved – Bilal is such a winning character, and his plight becomes all the more real and disturbing as the film progresses and his background is more fully explored. Perhaps the only barrier will be that the story is told through Simon’s eyes, and he is so beaten and weary that it may be hard for some to engage with his world view. As the film progresses, however, Simon’s humanity is gradually awakened, and he becomes a far more palatable protagonist for the audience to relate to.

What doesn’t change is Lioret’s approach to the material: Welcome is unremitting in its determination to eschew artifice and maintain a sense of horrible reality. From the authenticity of the sequences involving people smuggling to the way in which Simon’s life is characterised, there is no flash or sparkle to distract from the substance of his thesis, and the easy route is left for others. Its technical appearance is old-fashioned as well, maintaining simplicity throughout to allow the story of Bilal and Simon (and illegal immigration) to retain primacy.

Lindon is superb in the lead role, with his physical appearance ideally suited to the character of a man beaten down by the world and his own choices. He allows a subtle strength to shine through, particularly in the later scenes featuring confrontation with authority and his ex-wife. His turn is matched by that of newcomer Ayverdi, whose portrayal of Bilal borders on heartbreaking – he is so single-minded in his determination to attain a better life that he is hard not to like, and yet Ayverdi brings a charisma that only enhances Bilal’s tragedy.

The only minor flaw is that Simon’s tragi-heroic transformation from ostrich to man is a little too abrupt and might not be entirely convincing. The consequences of the earlier scenes in which he refuses to take notice of the problems around him are minor compared with those of his later actions, and yet there are no clear or believable reasons given for his newfound courage.

Writer/director Lioret has seemingly achieved his aim of raising the profile of the plight of illegal immigrants, with his film being nominated for many awards and highly successful at the French box office. That his characters and their tragic story are so masterfully realised is reward for his audience.

This is the type of movie that makes me feel guilty for not making more of my (relatively) privileged existence, it really is. Bilal’s in a bizarre no-win situation whereby he came to France ‘illegally’ and yet the authorities can’t send him back to a war torn country. All the same, the powers that be seem to be doing their darndest to close down even the local soup kitchen in an effort to ‘discourage’ such migrants.

It’s wonderful to see the character of Simon change from someone apathetic (or at least unwilling to challenge the status quo) to someone wilfully breaking the law to help Bilal. 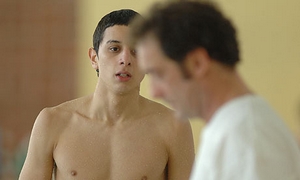 Though it’s hard to believe it’s taken this long for Simon to come around to a more compassionate stance (perhaps if we’d had some background of the early days of his marriage, suggesting he’d once been as active as his wife) it does make the acts all the more significant.

Whilst some looking for a good night out may be put off by the subject matter of Welcome, I can heartily recommend it nonetheless. A good film is a good film, no matter what the content. (Then again, I must admit to have sworn never to watch Requiem for A Dream again, despite heaping praise on it.) Philippe Lioret’s film is well paced and matter-of-fact in its delivery yet never struggles to entertain.

It’s perhaps a pity that Bilal’s fellow migrants such as Zoran (Selim Akgul) are given very little depth – they simply seem lost and confused. Whilst this is how many locals themselves may interpret the new arrivals, they could have done with more comprehensive characterisation. That being said, this may have diluted the film’s impact.

Welcome never strays into melodrama and the fact that we’re not bombarded by an over-the-top soundtrack helps the narrative keep on the straight and narrow, delivering a powerful tale that rarely missteps. That even great American works such as Precious fall into such traps is testament to the quality of Lioret’s film. This is a film that attempts to deliver the facts yet never forgets that these are human beings we’re talking about. It’s easy to see how this film would resonate with audiences around the world, particularly here in Australia where migration (both through official channels and otherwise) is forever on the political, moral and social agenda.