Every now and then a much-anticipated film lives up to its hype and the audience is transported by that special feeling only a film can provide. Many films fail to meet expectations, however, which is the sad plight facing Wanted.

James McAvoy is Wesley Gibson, a bored, middle-class nobody, stuck in a job he hates and living with his girlfriend who is sleeping with his best friend. When Angelina Jolie’s Fox enters his life, an underworld he never knew is revealed to him, and a destiny he never imagined is discovered. Thrust into the life of assassins, he must tread carefully to know who to trust and what is motivating those who guide him.

Wanted has the potential to be truly great – an exciting premise combined with sexy actors, special abilities and showstopping action set-pieces. The problems start early in the piece, however, with the first chase sequence almost unwatchable due to director Timur Bekmambetov’s insistence on using faux-handheld cinematography to tell his story. There is very little that is truly identifiable within this section, with a blur of half-recognised images mixed with rapid cuts such that one gets the impression there’s an exciting car chase going on but can’t really be sure.

The development of Wesley’s skills in the assassin’s art is reasonably interesting, although information that is clearly relevant for later in the film is flagged so obviously as to make watching Wanted about as surprising as another disappointing Hollywood Summer blockbuster season. The film also cheats by allowing its characters to heal when they should otherwise be suffering.

McAvoy and Jolie are both passable in the leads, although Jolie never seems to feel the need to get out of second gear. McAvoy’s American accent is distracting, although most of his lines occur in the narration – a device that seems unnecessary given the straightforward plot. Morgan Freeman and Thomas Kretschmann aren’t asked much and consequently provide little.

There are some entertaining sections, particularly the action pieces, although many of these have been spoiled by their inclusion in the trailer. Audiences may have taken a collective breath in the first time they saw Jolie hang out the windshield of a sportscar and shoot at pursuers, or assassins bend the path of their bullets, were they not to have seen those things many, many times over in the saturation advertising for the film’s release.

That The Matrix did bullet time better almost ten years ago says much about Wanted – good ideas, but average characters and poorly shot and abysmally edited action scenes combine to leave the audience wanting more.

It was apparent from Night Watch (Nochnoy dozor) and Day Watch (Dnevnoy dozor) that Timur Bekmambetov has formidable talent. The action scenes in those films were awesome, and his overall visual flair was hard to beat. Unfortunately, his storytelling skills left a little to be desired. For the first time in my life I was actually kind of excited at the prospect of an overseas talent being snatched up by Hollywood (shameful, I know).

Wanted makes a lot more sense than his previous films, but that’s only because the story is paper-thin. 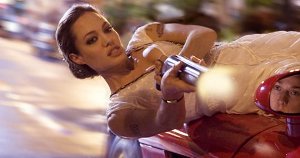 The similarities with The Matrix are hard to ignore, but the Wachowskis’ film seems like Shakespeare in comparison. Wanted is VERY trashy. It doesn’t even pretend that the plot is there for any other reason than to take us to the next action set piece.

And the action is pretty good. I have no idea why Mark’s kinetosis kicked in this time around, because I believe Bekmambetov to be one of the few directors who really knows how to direct a handheld camera. The balletic slow motion is fun and the film isn’t afraid to show a bit of blood, which is a nice change from The Matrix. Like his previous films, nothing in Wanted looks real, which kind of makes the special effects more believable, somehow.

I spent quite a bit of time being distracted by McAvoy channel surfing between accents, but overall he does pretty well. Angelina Jolie could perform this kind of role in her sleep, as can Morgan Freeman. (Although we do hear him swear, which is rather shocking, mainly cos he isn’t very good at it.)

The pacing of the film is a little slipshod, only insofar as it could have been a more relaxed at times. We have no time to really feel for the characters when events whiz past at such a speed. It wins points for including Nine Inch Nails’ ‘Every Day Is Exactly the Same’, but then loses them two minutes later by replaying the same verse once more.

Wanted fails to have a lasting effect, though is entertaining enough when you’re watching it.