Pixar have well and truly outdone themselves this time. Wall-E would have to be one of their best films, up there with Toy Story, Monsters Inc. and The Incredibles.

The apparent simplicity of the narrative is its single strongest asset. Set far in the future, when the complete human exodus has left Earth a giant rubbish tip, one robot remains clearing up the mess. He’s tiny, yet diligently works every day to clean up the crap we left behind, collecting many curios along the way. Wall-E himself is a mix between E.T. and Number 5 from Short Circuit, and his childlike sincerity is enough to win over any viewer within seconds.

The first portion of Wall-E has been compared to a silent film, and whilst that isn’t entirely true, it certainly lays out the narrative with very little dialogue. When Earth is visited for the first time in who knows how long, everything changes for our solar-powered hero. The film’s themes are powerful without being overwhelming, which is a nice break from the likes of Happy Feet. It’s a science fiction film, a cautionary tale and a hilarious adventure all in one. It’s true that the film’s initially strong start wanes a little once the setting changes, but it’s still one of the best animations of the last decade.

The film isn’t at all original – everything echoes films we’ve seen before, even the score seems reminiscent of A New Hope more than once – and perhaps this is its only flaw. The robots’ facial gestures are minimal in the extreme, yet somehow convey more than words ever could. The voice acting is superb – in the case of the robots they only ever have one or two words to choose from, but the subtleties in intonation are astounding. The casting has a couple of nods to the genre – Wall-E is voiced by Ben Burtt, the man responsible for pretty much all of the science fiction sounds we associate with Star Wars, and Sigourney Weaver plays the space ship’s computer, putting a nice twist on her performance in Alien.

The animation is sublime. I still don’t quite understand how one spends a 180 million dollar budget, but it’s easily the best looking animation in a long time. The Earth scenes and the robots have an ultra-realistic appearance, whilst the filmmakers haven’t been silly enough to try and replicate real humans, and instead present them as extremely cartoonish.

I can’t truly explain how perfectly made this film is. It really puts the other animation studios to shame. Recent examples have been pretty awful, and Kung Fu Panda‘s success shows that there is no accounting for taste. Even at their worst, Pixar are (Buzz) light years ahead of the competition, and as long as they are intent on producing quality films that don’t skimp on the writing stage, they’ll be the leaders for some years to come.

Although Pixar have a long track record of producing critically acclaimed animated films that have traditionally left audiences in raptures, much of their output over recent years has felt like just so much more of the same old. Cars, Ratatouille and The Incredibles were all no better than average, and WALL-E now joins this less than illustrious list.

In the near future mankind leaves the Earth due to the overwhelming pollution and waste build-up we have created, with only a series of small clean-up robots left behind. Only one is still working however, an ingenious, self-repairing little guy who knows himself as WALL-E (Waste Allocation Load Lifter Earth-Class). 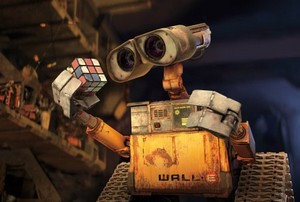 When a probe from the human mothership returns to Earth to check on the progress of the cleaning effort, WALL-E becomes smitten with EVE (Extraterrestrial Vegetation Evaluator), and will leave Earth on a remarkable journey in pursuit of what just might be love.

The early sequences before the arrival of EVE are the best of the film, with WALL-E capturing the imagination with his mixture of efficiency, diligence and curiosity. There are parallels to the opening scenes of I Am Legend, which also shone most brightly in its character- and setting-defining first act, and it almost feels a shame when WALL-E’s world welcomes a new inhabitant. What follows is a rather generic animated action film with far less heart, as a blur of colour and light accompanies WALL-E and EVE as they attempt to save humankind.

The decision to portray the descendants of the humans who made the Earth uninhabitable as lazy sloths who spend their entire day making videocalls on individual hovercraft and drinking pureed meals through straws is an interesting one, although to suggest that it isn’t just another facet of an overwhelmingly anti-human propaganda exercise is somewhat naive. Happy Feet and now WALL-E appear to be part of a systematic attempt to teach our children that humanity is an evil blight on our world.

The animation is of course top-notch, with the Earth environment especially impressive. The mothership concept is a good one, with several intriguing ideas of how its society may evolve. Voice acting is excellent, and that the film can maintain the audience’s interest with next to no dialogue in its first act is a feather in its cap.

The aggressive theme of humanity’s evil aside, there is enough here to satisfy most viewers, although it is hard to reconcile the stellar first sequences with the run-of-the-mill second half. Pixar continues to make solid if unspectacular children’s films that are an easy sell, but this certainly isn’t a world-beater.