Okay, so I had a feeling that they would botch this film.

What’s so annoying about this film is that it could have been fantastic. All the elements are there, and Radha Mitchell is a strong performer, but unfortunately the end result is a bit of a mess. 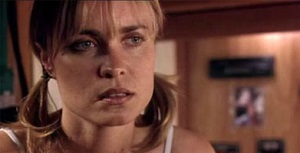 I’ve liked so much of Mitchell’s work, from the fantastic Pitch Black, to High Art (one of the most sensual films I’ve ever seen) and even Love And Other Catastrophes, which I quite enjoyed even though no one else did. I think it’s kinda fortunate for her that she hasn’t quite hit the big time, as it means she has been able to jump around different projects, rather getting bogged down in lead roles (in ways that our major export Nicole does). I’m sure she’d like to earn more money, but all the same I think she has had a fantastic career thus far. Suffice to say that Mitchell is great in a less than perfect film, and sexy as always (although I wonder how cold it would have been out in the middle of the ocean, and if she really would have been wearing a bikini all that time).

The supporting characters in Visitors, however, are all a bit silly. Most of the time they are over the top caricatures. This really brings the film down, as I think that the rest of the world should have been very realistic, in order to directly juxtapose Mitchell