Ok, that’s out of the way! I really didn’t love this film, not sure I even liked it… And Stuart is an idiot.

“Why is Stuart an idiot?”, you ask. The idiot turned to me at one point and said “wouldn’t it be cool if…” and then went on and detailed his ideas about the final plot twist! Sure, I had already considered it, and felt it was way too lame to be really the direction the film would take. But that’s not the point. If anyone knows how I feel about behaviour in the cinema, it’s Stu. Anyway, when it turned out he was right (what was Shyamalan thinking??), he turned to me again and made some kind of upbeat grunting noise like Nelson in The Simpsons. Not only did I have to deal with the shock of Shyamalan’s twists (there are two ffs!) being see-through and ridiculous, I had to deal with Adrien Brody sitting next to me.

Anyway, this film is about child abuse. A bunch of cult leaders abuse their kids in the name of protecting innocence. END SPOILERS There, I’ve ruined it. It is not nearly as clever as it thinks – does it provide sharp social commentary? I’m sure Shyamy thinks it does. And when is this guy going to get over ‘the twist’? Ok, so it worked in The Sixth Sense. Big deal. Move on. For the sake of your career as much as anything – you’re becoming known as a one trick pony. Bryce Dallas Howard is superb. She was brilliant as the heroine of the piece, at times moving, perceptive, courageous. Her performance is wonderful, and surely this girl is destined for great things – even were she not Ron’s daughter! Hurt and Phoenix are also very good. The scene on the porch between Howard and Phoenix is excellent, clearly the most well written segment of the film, and beautifully played. The cinematography is lovely – the village is a beautiful place. The soundtrack was suitably thrilling, formulaic perhaps, but I still jumped when I was supposed to. The editing is not terrible.

With metaphor and imagery, Shyamalan goes way over the top. He chose red as the bad colour? And made the crippled girl the most perceptive and courageous villager? Not in the least impressive.

This is not the worst film to come out this year, but it is really not much chop. If you’re the leader of the Australian chapter of the Shyamalan fan club like Stu, you’d probably love this. For the rest of us, it’s just more of the same. See it for Howard.

In case you don’t know, I worship M. Night Shyamalan. The Sixth Sense was a good solid film, and the two after that simply got better and better. Of course this means that I was counting down the days until The Village was released. The trailer was promising, and in true Shyamalan style it gave away very little. The prospect of it being a period piece was fascinating and exciting also. If you go to my top ten, you will also note that Signs scores a mention there. 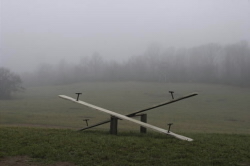 So basically The Village had a lot to live up to… and thus it comes as no surprise that I was a little disappointed.

Don’t get me wrong, Shyamalan is still a master of his craft, and no one can do thrillers quite the way he can, but The Village seemed a little like he was caught on his back foot.

The brilliant moments are still here: the fantastic cinematography, the wonderful music. But the film seems almost as if he was in a rush to release it. The entire film seems a bit segmented, almost indecisive at times, as if Shyamalan didn’t know quite when to advance the plot. Many of the revelations could have quite easily been moved forward or backward in the film’s timeline (and I imagine they were changed around a lot in the editing process), and maybe this adaptability was a curse rather than a gift. I don’t know whether there’s any truth my theory, but suffice to say that The Village isn’t quite as finely tuned as its predecessors. 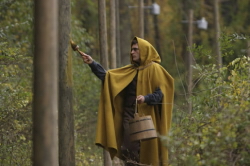 We have a stellar cast here, and it is a pity that so many great actors (including Sigourney Weaver, Brendan Gleeson and Michael Pitt) have so little to do. Bryce Dallas Howard owns this film completely, and her incredible performance is one of The Village’s best features. At times this film felt a bit like the director was having a go at making Brotherhood Of The Wolf (Le Pacte des Loups), and there are many similarities in both look and feel of this film to that fantastic French action movie.

Shyamalan hasn’t lost his ability to thrill and scare – it’s all here, if not quite as shocking as The Sixth Sense or as tension-filled as Signs. All the above being said, I still enjoyed this film more than any others I’ve seen in the last six months or so.