When I first heard that Jackman was going to be playing the vampire hunter from Dracula I thought ‘way cool! There’s no way that could be a bad film!’ (I have been known, on occasion, to use the expression ‘way cool’… it’s a thing.) And with Stephen Sommers at the helm? The writer/director that brought us the great Deep Rising, The Mummy, and The Mummy Returns? Way even cooler! 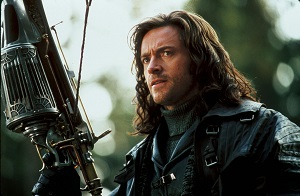 But I should have known there was something wrong as soon as I saw the trailer… ‘Dracula! Frankenstein! The Wolf Man!’ proclaimed the voice over. Huh? Why mix up the monsters? It didn’t really work for The League of Extraordinary Gentlemen, and that had well written source material (a comic by the great Alan Moore), as opposed to Bram Stoker’s badly constructed novel.

So, I had decided that this film was bound to be bad, even if, all the initial elements had been there to create a fantastic feature. I was right. Basically.

Whilst Van Helsing starts out strong, with a couple of great sequences that set the mood, it’s not much more than a vertiginous CGI slugfest. The concept is good: we haven’t had anything in the Transylvanian camp genre recently, and this film revels in the silly accents and extravagant castles. But unfortunately it’s the characters that let the film down. Unlike The Mummy and its sequel, Van Helsing’s characters can be summed up in a couple of words and are basically differentiated via their looks. Brendan Fraser and Rachel Weisz were a couple of great adventurers – here we’re stuck with a very boring Jackman whose accent seems to swing between British and American. Kate Beckinsale does her best, and certainly achieves more as the sidekick than she did as the lead in the awful Underworld; Richard Roxburgh is very over the top in a boring kinda way; and David Wenham is the only person that manages to make the most out of the very limited script they had. I can’t even remember Jackman saying anything interesting. There is no witty repartee in this film, something that always goes down well in a period adventure movie (think the Indiana Jones series, or The Mummy).

And the mixing up of the monsters? A complete shambles. 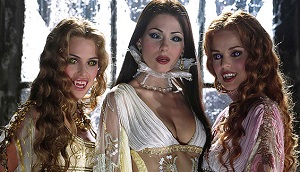 Stephen Sommers throws the mythology with which we’re acquainted out the window completely. Okay, so it’s acceptable to break certain rules we’ve come to expect from vampires and werewolves (for instance Blade), but only if you replace it with something just as cool. Here it seems that he was simply attempting to mould the monsters’ powers and weaknesses so that they would fit into the simplistic plot he had designed.

There are also some glaring holes in the story, parts that don’t make sense and a score of underdeveloped plot devices and character traits.

So what remains are the special effects. Now The Mummy proved that a special effects movie could also be entertaining. Here however we’re simply subjected to the usual Hollywood technique of dazzling with so much fast-paced imagery to the extent that we have no idea what is actually going on. Also, Hollywood has got to learn: a CGI creature fighting a real actor is fine; CGI creature fighting another CGI creature isn’t. Having nothing real on screen for a climactic fight scene simply doesn’t work (as we’ve seen in films like The Hulk, or even parts of Spider-Man). When this happens I find myself so detached to the extent that I care very little about what is going on.

I realise that much of the stuff I’ve been whinging about isn’t that important in a big budget special effects movie. But there is one thing that is completely unforgivable about Van Helsing:

There were moments when I was almost excited by the action packed adventure plot, but they were few and far between. What’s left is a mixed-up, mind-numbing, special effects romp of unrealised potential.

A “sexy vamp romp” that unfortunately is unfathomably silly.

I had high hopes for Van Helsing, I really did. I guess I should have known, that after the failure of Underworld to live up to expectations, Van Helsing may have been best viewed without any presupposed hopes of greatness. I also viewed the merging of classic horror characters in one film with immense trepidation after the abysmal The League of Extraordinary Gentlemen. Unfortunately, I had hoped, in spite of LXG and Underworld, for something wonderful and instead was faced with something only a little bit good, and lots bad. 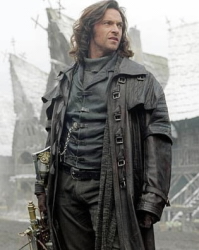 Hugh Jackman is the titular vampire hunter of much renown, and he plays his role reasonably well, although what Sommers was doing investing his hero with so little personality and spirit I will never guess. Jackman does what is asked of him, but he is never allowed to shine in the way he does in X-Men, due to a combination of poor scripting and failure of character development.

Beckinsale is ok, but again she struggles to impact greatly on the viewer for much the same reasons as Jackman. Her story could (should) have been more dramatic, but the heavy-handed attempts to introduce familial drama and personal tension left me feeling less than impressed.

The only player who fulfills their role well, as Stu suggests above, is David Wenham. Making the most of the sidekick position, he shines, hopefully encouraging Hollywood to invest more in this most versatile of actors. 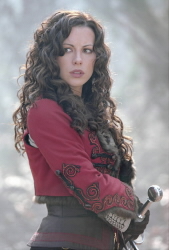 The CGI is at times clunky and inconsistent. (I also agree with Stu’s comments about the final showdown between two CGI characters, although I don’t believe it is impossible to do, just very difficult. The CGI creatures in The Lord Of The Rings: The Return Of The King and their battle, animated by Weta’s Massive system are a lesson in grandscale CGI, although perhaps it lacked the intimacy that Sommers was shooting for here).

The music is really the only strong point – the mandolin pieces used when travelling scenes predominated were excellent. I caught myself wondering at one point exactly which instruments were being used, so I guess that in some ways it may have distracted me from the vision – clearly not the aim for any soundtrack – but I think this is because the music clearly was more enjoyable than the drama onscreen!

This kind of film simply MUST be fun, which Sommers managed so successfully in The Mummy and its sequel, but failed here. Whilst I did enjoy some of the action, the plot is indecipherable and absurd, and thus the film fails to capture the imagination. It is an enjoyable ‘popcorn flick’, but given there have been so many better films in recent times to fill this market (Pirates of the Caribbean: The Curse of the Black Pearl being the best example), Van Helsing is rightly going to struggle to compete.