From the production company that brought you all those super-cheap Paranormal Activity movies comes Unfriended, another found footage film that was done on the cheap but has the added twist of being solely composed of social media footage. That’s right, folks, it’s a horror film that’s oh so generation now, what with all the use of Skype, Facebook, Spotify, YouTube and chat roulette. I can hear dozens of you groaning at the prospect of sitting through such a film, but here’s the thing: Unfriended is really, really well made. 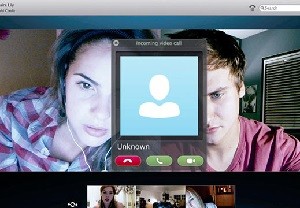 The entire film is from the perspective of Blaire’s (Shelley Hennig) computer screen. As the film starts, she’s listening to music, watching YouTube and Skyping her boyfriend, Mitch (Moses Storm). Very quickly, however, a hacker appears, sending them mysterious messages concerning the death of their peer Laura Barns (Heather Sossaman) exactly one year earlier.

We never leave Blaire’s screen. It sounds frustrating, but the genius thing is that this opens up all sorts of storytelling techniques that you don’t get in your usual film. There are times when she’s talking to friends on Skype, yet she’s having a typed private conversation with someone else. We get to see her saying one thing, doing another; we even get to see her hesitation as she begins to type messages, then changes her mind. Even little things, such as seeing where her mouse pointer hovers, tell us what she’s thinking.

The film is told in real time, a breezy 80 minutes, and there is never a dull moment to be had. It’s a masterpiece of editing, and each moment of video lag is perfectly timed to up the creepiness factor of the weird goings-on. I should point out that I didn’t find the film even remotely scary, but I was hooked throughout, fascinated to see what would happen next.

A similar idea appeared in the V/H/S anthology film, with ‘The Sick Thing That Happened to Emily When She Was Younger’. I don’t know if that short film inspired this feature, but Unfriended certainly takes the idea and improves upon it.

The trailer really doesn’t do this film justice. The performances are wonderfully naturalistic and the creepy events come thick and fast – if the sitting around waiting for something to happen shtick bugged you in the Paranormal Activity films, then this may be more your thing. The film isn’t perfect, however, and fumbles somewhat in the final moments.

I’m sure Blumhouse Productions have a sequel in the works, though I can’t really see where such a follow-up could go. As it stands now, however, Unfriended is a much better film than it had any reason to be. Brilliantly edited and with some nifty narrative techniques, it’s a cut above what you may expect.