I was so excited about this movie. I mean, you couldn’t go wrong with a gothic action extravaganza about vampires fighting werewolves, could you?
Yes you can, and they did.
This movie is shit.
The opening scene was crap and it got worse from there on. 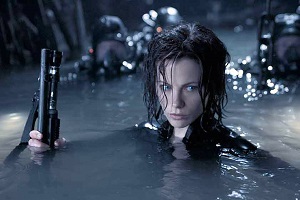 First rule about action movies: there has to be action. There was soooo much talking and so little fighting. This on its own wouldn’t be so bad if what they were talking about was remotely interesting. It isn’t.

Any time there was an action scene it simply involved people firing off round after round of bullets (and missing). Hello? The majority of the cast has supernatural powers! WHY DON’T THEY USE THEM?!

I spent most of the time in this film switching between two emotions. Firstly boredom: because nothing ever happens, people simply walk around delivering wooden dialogue about uninteresting topics. And secondly: confusion, because whenever there was an action scene it was dark and everyone was wearing black. I couldn’t tell who I was watching, or which side they were on.

This film is saved from a rating of zero simply because of the costuming and set design. It looked great, it’s just such a pity that nothing else worked.

Apparently there are two sequels in the works, which is astounding. (Did somebody actually like this film?) The good thing about this is that there is absolutely no way that a sequel could be any worse.

For once, Stuart and I are in almost full agreement!

I was originally intrigued about this film by the billboard size version of the poster above that was conveniently placed for me to stare at as I waited for the right turn arrow on my way to work in the morning. 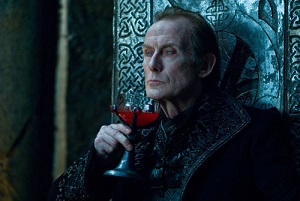 What a way to wake up and start the day! Kate Beckinsale as a gun-toting, leather-clad creature of the night! It was enough to distract one from the task at hand, so to speak. Anyway, brilliantly manipulated by the marketing gurus, I downloaded the trailer, which was when I should have started to realise this film was going to suck.

Sure, it showed lots of Kate in tight black leather, and it really demonstrated the lighting and atmosphere would be amazing. But even then the film looked like it could really go one way only, and that was down in my expectations.

An unfathomable plot, inane dialogue, a ridiculous love story, an absurd unwillingness to use any special powers – the list of things wrong with this film could go on and on (and on). As Stu pointed out – why weren’t these supernaturally blessed beings willing to use their best talents? And why are they so crap at using automatic weapons? Any kid who’s put 20c into a ‘Time Crisis’ machine could match these losers!

The redeeming moments are rare and widely separated. The costuming, lighting and cinematography are amazing. But hanging great clothes over a bunch of well-lit shop mannequins would have the same effect. These minor positives are far outweighed by the many major flaws.

Should you see it? If you love vampire or werewolf films, or have a leather fetish, you may find something here worthwhile. But for the majority of you, you’d be better off finding a romantic comedy or a good book.