I’ve never known two actors that are more despised by sections of the community than Hugh Grant and Sandra Bullock. It’s not just that people don’t like them, they HATE them.

Well I happen to think they’re both fantastic. 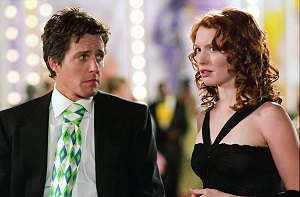 I thought that Bullock’s performance in Speed tipped the scales, turning a great action movie into a fantastic action movie. (Then again people tend to perform exceptionally well when they’re doing it alongside Keanu Reeves… why is that, I wonder?) Similarly it was Grant’s performance in Four Weddings And A Funeral that made the film so memorable. Admittedly I did get sick of his bumbling Englishman routine (as did everyone else), but then About A Boy came out and I realised that he still had the goods.

In fact the presence of either of them in an otherwise average-looking film (such as this one) will often tip the scales and convince me to see it.

Well, I’m glad I did. Because Two Weeks Notice is lots of fun. In my books this is a great romantic comedy. The trailer I saw at the cinemas didn’t do the film justice, but that isn’t surprising considering the difficulty one must face when cutting a trailer for a comedy – do you show the best jokes and ruin them, or save them for the actual film? The spark between these two is fantastic, and although Grant gets more comedic moments than Bullock, she gets her turn to make you laugh also.

There’s nothing at all challenging about this film. And, contrary to popular belief, romcoms can make you think (see Eternal Sunshine of the Spotless Mind or Chasing Amy). But if you want to sit back and laugh with some schmaltzy and reasonably predictable romance, then this is for you.