Looking back on my reviews for Twilight and New Moon, I’m a little surprised at how generous I’ve been. I suppose it comes down to the fact that I read Stephanie Meyer’s books first, and had already been suitably horrified at the thought that millions of teenaged girls were worshipping this franchise (and disbelieving that grown women were doing the same). Thus, when it came to viewing the films, I could just sit back and turn my brain off. To see the films first (as Mark has) must indeed be quite unsettling.

Rest assured that Eclipse continues the franchise’s horrendous record of setting feminism back several decades. Bella Swan has no ambition whatsoever, and is only interested in being with the man/men she loves. She’s fragile and passive, and frequently needs protection from Big Strong Men. Edward, ever the gentleman, once more believes that keeping her innocent and in the dark when it comes to Serious Men’s Business is the best thing for her (you’d almost expect Mike Brady to pop up and suggest she take a Valium or two), and can’t wait to own her in the legal sense. More importantly, Bella is so incapable of taking care of herself that she can’t even manage to DRESS APPROPRIATELY WHEN GOING CAMPING ON A SNOW-TOPPED MOUNTAIN.

In its defence, Eclipse does suggest that young women have libidos, which is a nice change from what we usually see in teen films, where the guys are forever craving sex and gals simply put up with it to please them. The men in the Twilight franchise seem more intent on fighting over ownership of their female territory rather than jumping into girls’ pants.

David Slade is at the helm this time around, and I cannot think of a director whose output has been more disappointing since such a perfect debut feature. Of course, Hard Candy is a hard act to follow, but did he have to make 30 Days of Night and then this? In any event, at least you can rest assured that Eclipse looks stunning – Slade has a fantastic cinematic eye. This is easily the best-looking of the franchise thus far, which has definitely become a lot glossier since the overwhelmingly under-budgeted first film. The special effects are quite decent, and this time around, they’ve come up with quite a nifty way of dispatching vampires (I imagine the studio was keen to let Slade work his magic without quite the gore of 30 Days of Night, thus ensuring that the film keep its M rating).

As we have come to expect, the soundtrack to Eclipse is great. Even the most outspoken of detractors can’t deny that the franchise continues to pump out solid albums. Howard Shore’s score is really good also, though at times it sounds a bit like the recurring theme we’ve been hearing in this year’s ‘Doctor Who’.

The performances are more of the same. Robert Pattinson continues to look constipated, though I’m told that this is what a vampire in love looks like. Taylor Lautner is constantly shirtless, though at least this means that the guys in Hollywood get a turn at being nothing more than eye candy, rather than the girls (impressively, Bella is constantly dressed down – I don’t think we ever see her in anything but jeans and a plaid shirt and/or hoodie).

Eclipse delivers exactly what we’ve come to expect, which I imagine is what the studio and the fans want. It doesn’t take any risks, nor does it stray far from the source material. This kind of safe filmmaking is never going to be brilliant, but makes for adequate entertainment.

The ongoing and striking popularity of the Twilight series of books and films continues to astonish me, and while Eclipse is probably the best of the three films to this point, that is faint praise indeed.

It’s now coming up to the time when the wholesome children of Forks, Washington, are due to graduate high school, and yet Bella (Kristen Stewart) is still a whiny little bitch who can’t make up her mind which of her two great loves she loves most: Edward, the supposedly sexy, sparkly skinned vamp-boy (Robert Pattinson), or Jacob (Taylor Lautner), the buff Native American with an almost animal dislike for vampires. When a slew of young people in Seattle go missing, the Cullens figure someone is creating an army of vampire ‘newborns’ with the sole purpose of killing Bella, and an uneasy alliance must form between vamp and wolf.

What follows is the most boring, overblown, ridiculous, poorly written and horrendously paced film I can recall seeing since the last Twilight film wasted my time and energy. It seems that the entire point of Eclipse is to lead into a ‘great battle’ between the army of newborn vampires (actually, a handful of pasty looking guys and gals) and the Cullen clan with the wolf-pack by their side. However, when it finally gets to the long-promised sequence, the audience is allowed to see almost nothing thanks to the editing style chosen, before being whisked away to a more personal battle between Eddie and Victoria (Bryce Dallas Howard). 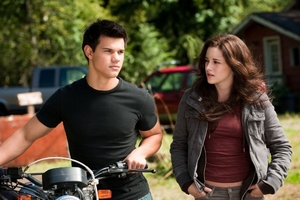 The amount of time and energy spent detailing how dangerous this situation is before not actually showing anything of the sort amounts to a betrayal of the audience.

Nothing happens in the first hour and a half of this film, apart from more pathetic posturing by what can only be the single least inspiring female character in the history of modern film. ‘Oh, Jacob, did you ever fall for someone like that??’ she asks, twisting the knife with scarcely believable naiveté, knowing full well that she is making this unlucky wolf-boy her emotional bitch. A single speech made by the pitiful ‘heroine’ of this piece near the end of the film can’t make up for almost three full feature-length films worth of moping and passivity, and that screenwriter Melissa Rosenberg (and Stephenie Meyer for the source) think Bella can be redeemed by this moment is all the more frightening. If only the most phenomenally successful text of its time could have featured a female lead worth bothering to cross the street to avoid.

While the CGI is adequate, the soundtrack passable (although frequently overtly manipulative), and the performance of Lautner as Jacob is acceptable, there is really little else to recommend this film to an audience. Anyone still silly enough to think Eclipse will be enjoyable as a vampire or werewolf film would be best to think again: the vampire and werewolf genres have lasted as long as they have for a variety of reasons, not one of which is addressed or enhanced by this series.

All of the faux-romantic posturing and make-believe may appeal to a pre-teen demographic, but heaven help the poor young men of the near future who are going to have to try and date/shag/marry a generation of women brought up on this shit. More to the point: heaven help those young women, whose concepts of romance and lust risk being so distorted by the preposterous product of Meyer’s lack of imagination.

It is beyond amazing that so many can pretend so little means so much.