At the risk of alienating any early teen female readers of hoopla.nu who will probably lap up Twilight and go back for more, it really just isn’t very good.

Now a worldwide phenomenon, it appears that Stephenie Meyer’s novels of young love may have capitalised on the success of the Harry Potter series… while Harry has finally won his battle with Lord Voldemort, his fans are growing older and their need for pseudo-supernatural fiction has merged with that for Mills & Boon-style bodice ripping.

When Bella Swan (Kristen Stewart) moves from her home town of Phoenix to the tiny village of Forks in Washington to live with her father, she must go through that most dreadful of teenage inconveniences – starting at a new school. Immediately capturing her attention is Edward Cullen (Robert Pattinson, who used to be Cedric Diggory in Harry Potter & the Goblet of Fire), a bizarrely made-up pseudo-goth with pasty skin and similarly pasty foster siblings. Although she does make more normal friends, it is Edward who will change her life as he develops into her first true love.

The pasty appearance of the mysterious Cullen clan is most helpful, as it evokes a perfect description of both the anaemic plot and the uninspired performances. One wonders how Meyer has managed to capture so many avid fans, although it may just be that the book contains far more drama and substance than this screen retelling. Nonetheless, this film will be an introduction to Meyer’s world for many, and seems unlikely to win her many new fans.

The tone of the film may well be considered to be appropriate for a younger audience, but Twilight is just so unbelievably naive and forceably chaste, it is hard to accept when one considers the long and venerable list of attributes most frequently associated with this film genre. Bella and Edward fight ever-so-hard against their lesser urges, in a less-than-subtle message about youth sex, while girls dress to maximise their cleavage and then are morally outraged when any male dares notice. This world feels more like fantasy than those of many more obviously fantastical films.

Alongside the weak romantic-drama storyline, the plot holes are frequent and hard to ignore. A family so capable at hiding their identities can be figured out by any little girl in town for five minutes? The tracker with the most incredible skills in generations can be undone by a ‘vegetarian’?

Stewart is passable as Bella, and is certainly an arresting screen presence who draws more attention than many of her costars. Pattinson is lumbered with a role playing a supposedly tortured young man whose torture barely rates a mention, while for the remainder of the film he is allowed to be only brooding. He is less than convincing in the role, and one wonders how subsequent films will turn out with Edward as the lead male character.

This is one of those occasions when a review will be essentially meaningless – either you’re unaware of the teen phenomenon that is Twilight, in which case you probably won’t bother, or, you’re a teenage girl who lined up to get in to the first session this morning, and then squealed and whistled with every twist and turn. Box office success will mean more of these films will be made… you can read the hoopla.nu review of New Moon in 2010.

Now here’s the funny thing. I thought this movie was pretty good. But then again, the book is at times atrocious, so maybe it was just that I was able to make the comparison. Honestly, I think this film capitalises on the book’s (scant) strengths, without altering too much. And seeing Twilight with a cinema full of lovestruck teenage girls is probably the only way you’ll really ‘get’ a film like this. It’s a long time since I’ve seen a film that induced such vocal appreciation.

It’s important to understand that Catherine Hardwicke directed this film. 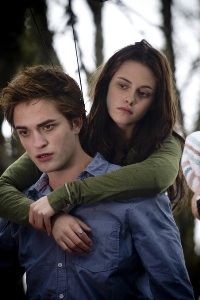 Catherine Hardwicke… as in, directed Thirteen, one of the earliest reviews on hoopla.nu, and this film couldn’t be more different. But she gets teenage girls. It is a Big Deal when Bella and Edward lock eyes from across the room, and holy moley the heavens collide when they actually touch.

Of course, most of the problems of the book are still here. Bella definitely isn’t a product of postfeminism, in fact she probably hasn’t even heard of the F word. Edward is still an utter prat. And I still can’t for the life of me understand what they see in each other. But thanks to Hardwicke’s direction it somehow works. Some of their scenes are really infused with a heightened sense of… well, lust (however chaste), and it’s really quite amazing.

The climax is great, also, even if it is still a product of such a poorly constructed narrative. Though the film does its best to trim the fat from the early scenes, and add in some action, the exciting and action-packed latter scenes feel tacked on just like they did in the book.

Kristen Stewart is always great, and is much better off leading a film such as this rather than The Messengers. The supporting characters are all spot on – particularly Billy Burke as Bella’s dad Charlie, and it’s a pity that so much time is spent with the Edward, cos he’s such a crappy character. He says things like ‘and the lion fell in love with the lamb’ for god’s sake. In ‘Buffy’, Angel managed the whole brooding thing without becoming annoying, but Edward’s insanely over the top from his first frame.

Even taking into account wankface of the century, there’s good fun to be had. The repressed sexual tension that Mark went on about works quite well actually, though I can imagine that it’s going to be less believable in forthcoming sequels. The soundtrack is also surprisingly good – filled with Radiohead, Muse and the like, only resorting to the typical teen movie ballad in the end titles. The film is beautifully shot, though the special effects are awful (something they’ll be sure to remedy in future instalments now that this film has made bucketloads).

I can’t see how fans of the book could be possibly disappointed, and those who thought the book was pretty poor may be pleasantly surprised. Twilight does the best it can whilst staying true to the source material.