Unfortunately this isn’t the case at all with Tsui Hark’s Vampire Hunters. What we have here is a wacky Hong Kong vampire film that outstays its welcome after about the first five minutes. 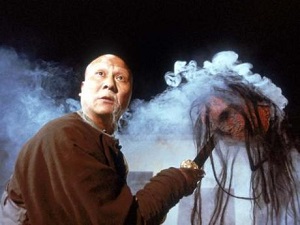 First of all it should be noted that this features the types of vampires I’ve only seen in Chinese films – decrepit corpses that can’t walk because apparently someone has tied their shoelaces together. Whilst this might sound like a clever practical joke, it’s hard to imagine that people are scared of a bunch of disabled corpses jumping towards them at a rate of about three kilometres an hour.

The action is the ultimate in stupid wire work – none of the actions performed by our heroes are remotely probable (or logical). The group of vampire hunters were interesting only in as far as they each had their own individual looks (including one which plaited his mole hair – way to go!)

Why do I bother? Well, if you know me at all you’d realise that I can’t go past a film that has the word ‘vampire’ in the title. Then again this also has the writer’s name in the title, a tradition I’ve never been impressed with, since it usually means that it’s all the marketing people had to go on when trying to sell the film. I’m glad that Columbia Tristar is making all sorts of foreign films available on DVD here in Australia, I just wish they would give me back my 86 minutes.