Last time I checked this film was number 50 on IMDb’s list of 100 worst films. I think that is a little harsh. I can easily think of at least 50 films worse than Torque.

‘Completely mindless’ does spring to mind, however… Torque is one of the most stupid films to come out of Hollywood, for sure. But that doesn’t mean it’s not entertaining. 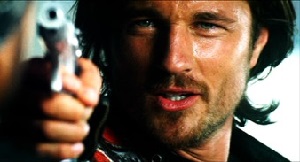 The plot’s an absolute ‘paint by numbers’ affair, and you’ve got the usual motley bunch of good guys and bad guys. Except that the good guys have kind of a bad streak, and the bad guys are good at heart – you get the drift.

Martin Henderson has the uncanny ability to look exactly like Tom Cruise one moment and then Emilio Estevez the next – and I’m sure neither actor would be willing to be involved in a film such as this. Matt Schulze is in this film, which I’m sure is breaking some sort of rule… honestly! You can’t be in both The Fast And The Furious and Torque… that’s like being a Beatles and an Elvis man at the same time.

There’s some ridiculous stunts in this film, and it kind of pisses you off when there’s no logic or reasoning behind why such feats can be accomplished by these ordinary people. I mean, on trains? And then there’s the big cat fight which seems to completely ignore all the known laws of physics.

Some of the supporting characters get some funny lines. Jay Hernandez is completely wasted in this film as is Will Yun Lee. These two sidekicks get almost nothing to do in Torque.

Everyone seems to be wearing a heap of makeup in this film, and I’m not just talking about the women. Everyone and everything is shiny and resplendent – even after being bashed around a bit.

That being said, Torque didn’t bother me too much. In fact it was slightly better than expected, which is saying quite a lot, considering…

Big, loud and stupid. Fun if seen in the right frame of mind.