It seems that this film was whisked out of cinemas within a week or so of its release. I remember quite an extensive television campaign, some terrible reviews, and then a lack of session times in the paper.

After seeing this film I have decided that this was most unfair.

There are lots of films better than this one. But there are also many that are worse. 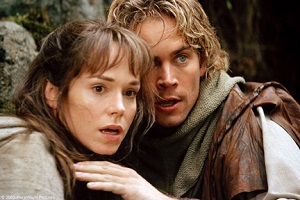 I’ve read quite a lot of Michael Crichton’s stuff, and I was already aware that this is one of his less impressive books. (In my opinion ‘Sphere’ was the best, although it didn’t turn out to be more than an entertaining diversion on screen. Actually I’d like to see someone have a go at turning ‘Airframe’ into a film – now that would be interesting… to say the least (and probably very silly… to say a lot)).

This film is tacky and more importantly is another one of the many time travel films I’ve seen in recent weeks that doesn’t make sense (a friend convinced me that Harry Potter and the Prisoner of Azkaban made sense, but failed to do so for this film). Jurassic Park succeeded by adding some more characterisation and subplots to the original novel. Timeline, however, pretty much sticks to the book and this is where it can let the viewer down.

Paul Walker is surprisingly good in this film, and it seems that he is the only actor here that can cope with the cheesy dialogue and less than impressive script. Billy Connelly seems like he doesn’t take the film seriously at all, and I have found this to be the trouble with many of his films (excepting maybe Her Majesty, Mrs Brown). Frances O’Connor is beautiful but her talents are wasted in this film. David Thewlis similarly has little to work with.

Even taking all of the above into account, I still quite enjoyed watching this film. A nice piece of escapism, even if I wouldn’t rush out to see it a second time. A bit more could have been made of the life or death situation the characters suddenly find themselves in, and some of the gratuitous subtitling of French is plain ridiculous.

Surely Michael Crichton’s second wind has just about run out?