100% Gilliam.  A continual cinematic onslaught, Tideland refuses to calm down, even for a moment. It’s equal parts discomforting, sad, manic and hilarious. 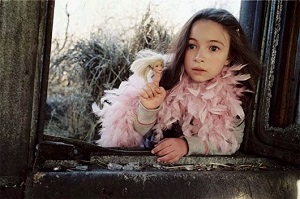 A kind of apocalyptic fairytale, the adaptation of Mitch Cullin’s book is cluttered in the way that Gilliam’s films usually are, and perhaps most closely resembles Brazil. The narrative constantly defies expectations. With all the references to ‘Alice In Wonderland’ I kept expecting young Jeliza-Rose to fall down the rabbit hole, but in fact the world she lives in is weird enough.

Young Jodelle Ferland gives a startlingly impressive performance (especially considering her age) and I sincerely hope there were psychologists on set to help her through the film’s more disturbing moments. She is the focus of pretty much every scene, and manages to somehow carry the confounding film on her shoulders with the aid of detached doll heads (among other things). This is the tale of a young girl that finds fantasy in actual horror, and one could hear the audience groan whenever the real world consequences were revealed. Brendan Fletcher and Janet McTeer are sufficiently extreme in supporting roles and Jeff Bridges reunites with Gilliam for the first time since 1991’s The Fisher King as the woefully inadequate yet loving father of Jeliza-Rose.

This feels like pure Gilliam in the way that The Brothers Grimm did not. The imagery is stunning, and as per usual Gilliam utilises all manner of special effects techniques to get the job done, from forced perspective to prosthetics to CGI. The film could have done with some cutting, if only because the duration is a bit too much.

Gilliam fans rejoice! After the disappointing The Brothers Grimm and the tragedy of the Don Quixote project (glimpsed in Lost in La Mancha), Tideland shows him back in fine form, out to please nobody but himself. It’s hard to truly love a film like this in which the chaos is so oppressive, and there doesn’t seem to be much in the way of dynamics – it’s the same all the way through, but it is truly a force to be reckoned with.

←Disturbia Curse of the Golden Flower→