It’s taken me a while to see this one, as I drag my feet when it comes to a: epic historical films, and b: obvious Oscar contenders. I’m glad I did finally make the effort because There Will Be Blood is a sterling piece of cinema. 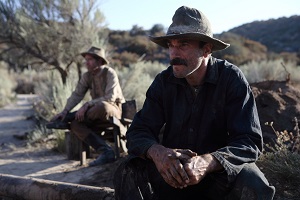 Paul Thomas Anderson’s first two ‘big’ features, Boogie Nights and Magnolia shared a little in common, particularly in their ensemble cast and multi-narrative approach. Thankfully, however, he didn’t get stuck in the same routine (M. Night, I adore you, but it’s true… you have to do something different). Punch Drunk Love was a bizarrely unique film, if for no other reason than it made Adam Sandler watchable. After quite a hiatus (for audiences, anyway) Anderson has brought us a hard-hitting portrait of ‘oil man’ Daniel Plainview.

Daniel Day-Lewis is a supernova here, and it’s little wonder that he won this year’s Oscar. Daniel Plainview is so manic and driven as to almost be caricature, but Day-Lewis finds the exact pitch at which his actions and reactions are both terrifying and brilliant. He’s a reprehensible man who hates everyone around him, and has no scruples when it comes to getting what he wants. To top it all off, he is a man consumed by ambition and greed, yet apparently has no interest whatsoever in material wealth. When offered money to sell his oil concern, he merely questions what he would do with himself.

Paul Dano plays the resident preacher, whose ideals clash explosively with Plainview’s, and he holds his own against Day-Lewis. On a couple of occasions Plainview is horrifying, and considering Day-Lewis’ well-known dedication, I’d have to wonder if Dano ever got a little scared. His character Eli Sunday is almost as driven as Plainview, and seeing him screaming and gesticulating for the devil to leave his church is more than a little unnerving.

The opening twenty minutes are something special indeed, devoid of dialogue, beginning with Plainview deep underground, hacking away at the earth. Johnny Greenwood’s score is phenomenal, and was unfairly ignored at the Oscars. It’s eerie, urgent and discordant, and contributes to the film’s overall uniqueness.

There are precedents for There Will Be Blood however, and Anderson’s major influence here would have to be Kubrick. There are half a dozen moments that feel like the same grand, lunatic devotion infused in many of Kubrick’s films. Surprisingly, the film never gets boring. My attention did waiver slightly towards the end, but for the most part it’s spellbinding from start to finish.

←All My Friends Are Leaving Brisbane Margot at the Wedding→

There Will Be Blood