Jack Black and Kyle Gass have the time of their lives in The Pick of Destiny, the first big screen outing for the two piece metal group and self proclaimed greatest band on Earth. In attendance are an incredible array of guest stars, including Ben Stiller, Tim Robbins, John C. Reilly, Dave Grohl and Meatloaf. 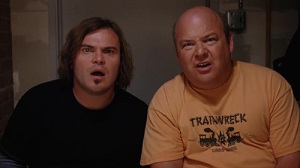 Fans of the ‘D will be used to seeing a fair amount of recycled material now (considering their shift from HBO TV show to CD album to touring) and The Pick of Destiny doesn’t exactly expand the universe, but rather treads the same territory with a little bit more flair than before. That’s not to say it isn’t entertaining. Considering I’d heard the soundtrack months before, and seen their live show two weeks prior to the release date, it was astounding that the film hooked me all the same.

The music is fantastic. As anyone’s who’s heard the band before will know, originality isn’t exactly their strong point. We jump from Stones to Sabbath to Zeppelin with almost alarming frequency, but it all combines into some glorious metallic rock opera monstrosity, full of (rather effeminate) macho posturing and over the top delivery. The Pick of Destiny is a glorified pisstake of rock and roll, and specifically metal, but it’s a loving homage at the same time. You can’t truly appreciate metal until you acknowledge and embrace the silliness of it all. Thus we have J. B. praying at the altar of Dio and mastering the secrets of the powerslide. There’s barely a dud moment and the film moves at a cracking pace. Surprisingly, the narrative only occasionally darts into gross-out territory, which is refreshing after the craze of the last eight years or so since American Pie.

Obviously, this is Jack Black in his element. High Fidelity may have seemed pretty true to life but this is J. B. sans acting, excluding the fact that he’s always hamming things up. Thankfully Kyle Gass is in much better form here than previously. He always seemed kind of flat next to such a scene-stealer, though of course he often had the difficult role of playing it straight next to a hyperactive maniac. Here the two of them mix up their formula with a relationship that has at least the simplest of dynamics.

I get why this wouldn’t be everybody’s cup of tea but the fact that it failed at the U.S. box office (I can’t seem to find any exact figures on their budget) is a travesty considering Date Movie grossed almost US50 million.

←The Fountain The Illusionist→

Tenacious D: The Pick of Destiny