Acclaimed by some reviewers as subversive and satirical, Talladega Nights has delusions that it is really taking it to American culture in its portrayal of the life of NASCAR hero Ricky Bobby, but in the end all this amounts to simple pretension. 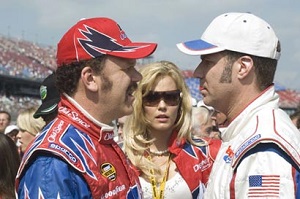 Ricky Bobby is played by man of the moment Will Ferrell in his usual boorish manner – think Old School, but replace fraternity houses with car racing teams and you’ll pretty much be able to predict his usual shtick – and nothing will surprise if the bizarre following Ferrell has developed in recent years does anything but ensure the box office success of this next instalment in his career playing anti-heroes.

Ferrell is supported by an assortment of medium level stars, including John C. Reilly as his childhood friend, and Anchorman buddy David Koechner. Michael Clarke Duncan, Gary Cole and Jane Lynch round out the ‘names’, although none increase their stature by their appearances here. Lynch and Cole work reasonably well in limited roles as Ricky Bobby’s parents, but could have been utilised far more to the betterment of the film in general.

A disappointing attempt at satire with very little success, Talladega Nights is filled with offensive stereotypes without ever effectively targeting those who perpetuate them. Perhaps, the writers were trying to illuminate the homophobia within such a male-dominated sport (and xenophobia in some sections of US society) by making their chief opponent to Ricky Bobby a homosexual Frenchman, but in the end they fail to nail their targets, and leave Sacha Baron Cohen as Jean Girrard out on a limb. His portrayal is clichéd and trite, (although this seems less likely to reflect Cohen’s talents as opposed to those of his writers), and Girrard is disappointing in his stereotypy. As the writers continue to make cheap jokes at his expense, this character never quite works.

Beyond the failure of the writers and director to come up with anything particularly insightful to say about a subculture so easily parodied, the sequences involving the racing itself are by far the strongest aspect of an otherwise pretty dismal film. While it is edited in the frantic, ‘don’t let them see anything for more than a split second’ style, (presumably to develop the sensation of racetrack action while allowing for the limitation of having major film stars behind the wheel), the jostling for position and spectacular crashes are sure to get any race fan’s pulse going.

Talladega Nights ends with trite sentiment, and its failure to define itself as either satire or homage to a NASCAR lifestyle means it never puts enough weight behind its punches. As a sports film it barely makes the grade, but as a comedy it fails on almost all levels. Only the most committed of Ferrell fans should bother.

←John Tucker Must Die The Host→