Luc Besson’s writing output has been astounding of late, and the newest inclusion to that list is Taken, a revenge action flick that we’ve all seen before.

That’s not to say it isn’t entertaining. Liam Neeson is the main reason this film works. His sincerity and determination makes Bryan’s predicament slightly more believable. As an ex-government operative, his worldview is a little paranoid – basically it’s a dangerous place out there, and you shouldn’t really leave your house. After reluctantly letting his daughter go overseas with a friend, his fears are confirmed as she is kidnapped moments after setting foot in Paris. Thanks to some handy exposition provided by the great Leland Orser, he finds out he has just over 90 hours to find her before she’s lost forever.

Bryan seems to represent US foreign policy somewhat – he’s sure everyone’s out to get him, and is indiscriminate when it comes to killing everyone who gets in his way. Watching him beat the shit out of half of Paris is more than a little exciting, even if the occasional bystander becomes collateral damage. The film makes very little sense, and the clues he picks up each step of the way are almost as silly as those featured in Shoot ‘Em Up. The publicity material of course makes reference to The Bourne Identity, but this film isn’t anywhere nearly as intelligent as that vastly superior 2002 film.

This is really a one man piece, and the supporting characters have very little to do. Famke Janssen is actually pretty awful as Bryan’s ex-wife, Lenore, though the screenplay would have to shoulder most of that blame. Maggie Grace plays the kidnapped daughter, Kim, though is of course missing for most of the film, and Xander Berkeley (from ’24’) is pretty much part of the set rather than of any significance.

The film is well shot, though Mark may have a problem with some of the action scenes, and the production values only let us down towards the end. It’s directed with flair by the cinematographer of some of Besson’s previous projects (such as Unleashed and The Transporter). Despite all the wacky killing it never gets as stupid as Transporter 2, at least – Besson and Leterrier certainly dropped the ball on that one. It is great fun though.

Why the modern action film is now required to be shot with the ‘shakycam’ technique is beyond me, however somehow Taken manages to overcome this bad decision to remain exciting and entertaining.

Liam Neeson is Bryan, a retired CIA ‘preventer’ who spent so much time away from his family during his career that his wife left him and his 17-year-old daughter doesn’t trust him. He now lives in the shadow of his daughter’s step-father, with his main goal in life to build a relationship with Kim (Maggie Grace) like the one they shared when she was just a young child. 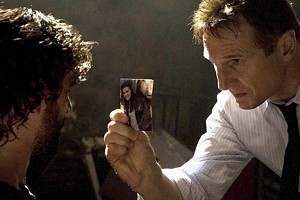 When she asks his permission to travel to Paris for the summer, Bryan has reservations but allows her to go, only to then be forced to step in and use his hard-earned skills to save her.

The plot is thin but the film tries hard to present a believable experience for Bryan, and Neeson does his best to allow him to be more than straight ‘action man’. This may be the best performance he has given in some years, although with only Aslan to compare to this may not be a valid assessment. Grace and Famke Janssen are both underutilised, while there is no real bad guy lead to set against the charm and appeal of Neeson.

The biggest problem in Taken isn’t its join-the-dots plot, however, but once again the choice of using handheld cameras and rapid-fire editing for the fight and chase sequences detracts from the experience rather than enhancing it. For some reason it isn’t quite as bad as in many of its ilk – with the abysmal The Bourne Supremacy and Ultimatum the worst examples in recent years – the argument for the use of these techniques is becoming more and more tired as time goes by. That many of the rather brilliantly choreographed fight scenes are not fully watchable is an indictment on those responsible.

Another problem that is unfortunately not the fault of the director is that once again his film and its audience have been abused by those responsible for its marketing, with the trailer giving far too much away. The experience of watching the film is forever changed and one wonders just how much more enjoyable it may have been were the events that unfold at the end of the first act a surprise.

Although it certainly has its flaws, Taken is a cut above many recently released action thrillers and should provide enough entertainment to be worth the ticket price

←The Strangers Son of a Lion→