In the world of Syriana writer/director Stephen Gaghan (who also wrote Traffic), everything is connected. A decision taken in the corridors of power in Washington DC will lead to a lost job for young Muslims in the Persian Gulf, which perpetuates the cycle of terrorism, thus affecting the decisions made in Washington. Gaghan seems to love the complicated interrelationships of business, politics and power, and in particular to tell his stories via the weaving together of many seemingly unrelated threads into a subtle narrative. In Syriana, he almost succeeds.

Focussing on several men – it seems the world of the international oil business hasn’t quite caught up to the women’s liberation movement – some of whom control vast wealth and have scant respect for their power, and others who deal in information, control weapons or even worse the naïve minds of the displaced, Gaghan seems to want to say that the lust for the power of oil (and therefore money) controls men, obscuring their morals and leading them to do evil things to one another. This theme permeates Syriana… Gaghan’s characters are conniving, deadly in their own spheres – from CIA operative Bob Barnes (George Clooney) whose experience in the Middle East, ability to speak Farsi, and desire to serve his country make him a perfect assassin, to lawyer Bennett Holiday (Jeffrey Wright) whose longing to elevate himself above the level of his drunken father not only drives him to be fitter and healthier but will cause him to betray those around him for a seat at the big table. By allowing only glimpses of each story before swiftly moving to another, Gaghan makes his point clear – these stories are part of a whole, whether it seems obvious or not. By the end of the film, he has gradually built a subtle exposition on power and wealth, and the result is a film with a very strong message. Gaghan, who previously explored the problems of the drug trade in 2000’s Traffic in a similar fashion, clearly has an interest in the corrupting forces of power, money, status and lust, and has written two impressive films on this theme.

The flaws in this film lie predominantly with technical issues – in particular the predominant use of handheld cinematography. While one may argue that a film yearning to be seen as a realistic portrayal of the worldwide problems within the oil industry, taking in settings as diverse as racquetball courts in America and sand dunes in the Middle East, may well use the handheld technique to make itself seem more real, the abuse of the audience this entails is at times intolerable. On several occasions, the movement of the camera seriously distracted from the on-screen vision, and there are also moments that are frankly nausea-inducing.

The other main problem is the use of cliché to tell several of the sub-stories. Noticeable particularly in that of the retrenched Muslim youths meeting their future Jihadist controller, and in the abovementioned strand featuring Jeffrey Wright, the predictability of the storyline limits the impact. That being said, many of the sub-stories are brilliantly told – in particular George Clooney’s, and that of the would-be Emir also stands out – and much of the performances are excellent.

The final effect of watching Syriana is certainly what Gaghan seems to have been aiming for – that one becomes more aware of the problems that ensue when people get wealth and power beyond their wildest dreams. The lust for more and more leads to a corruption of the soul, and Syriana makes that point loud and clear.

Syriana failed to engage me quite as much as I’d hoped. I had enjoyed parts of Traffic, the most significant being Erika Christensen’s breakthrough performance, but I also found it overlong and a little too ‘neat’. Whilst Syriana was a good length, I did find some scenes tiring, whilst at the same time having to concentrate to keep up with the myriad storylines. The film contains some powerful scenes, but the bits in between left a little to be desired. 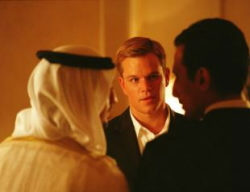 I’m a bit ashamed to admit it, but I found that I was craving a little more melodrama in Syriana. The pseudo-documentary feel was a little too convincing for me, so much so that when the big moments happened (be they tragedies or… well, mostly tragedies) I wasn’t as emotionally invested in the characters as I felt I should be. A tanned and podgy George Clooney (Good Night, and Good Luck.) actually delivered a fantastic character performance here, which is surprising considering I usually find him so bland, but like the other performances, I didn’t feel for him as much as I should have. The same goes for Matt Damon (The Brothers Grimm) and Amanda Peet (A Lot Like Love) – I always felt as if I was being held at arm’s length. Jeffrey Wright is getting his second wind quite some time after I first saw him in Basquiat, and his performance here is accomplished, but again, I simply didn’t feel anything for his character.

The cinematography was brilliant, and I have no idea what Mark is talking about – I never found the hand held camera to be distracting. In fact I might have found the film even more boring had this technique not been utilised. This is a beautifully constructed film, and the non-stop succession of scenes is masterfully assembled, but maybe I simply wasn’t in the mood for such a dense narrative. The parts were nowhere near as impressive as the whole. Like Brian de Palma (in recent years at least), Stephen Gaghan has the ability to orchestrate some stunning sequences, but overall his films are just a little too much.

←Just Friends A Sound of Thunder→