I don’t think I’ve seen any of Ken Loach’s work before. I know that he has a huge back catalogue of features, but the publicity never seems particularly attractive, even if the reviews are almost always great.

Sweet Sixteen features some fantastic acting. This is the type of film that feels like a documentary rather than a piece of fiction. 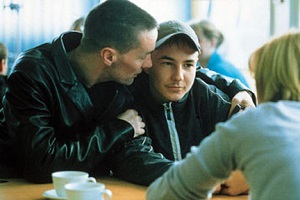 This is actually one of those few Scottish films that seems to think that Australians will need subtitles in order to decipher the thick Scottish accents. When the film started and I realised that the DVD makers had provided subtitles for my benefit I was outraged. Nonsense! (said I), I don’t need subtitles to understand English! Pah! How dare they think me so sheltered… I’m a man of the world!

Unfortunately after about ten minutes I turned the subtitles back on.

As soon as the subtitles were there I could understand what they were saying, but without them I’m ashamed to say I was a little lost.

With Sweet Sixteen you know almost immediately that you’re not in for an upbeat time, but it’s an enjoyable film all the same. I cared about the characters, and, for the most part Sweet Sixteen felt a bit more real than Thirteen, which went out of its way to try and shock the audience.