So after being less than thrilled at the prospect of a revived Superman franchise, I have to say that Bryan Singer’s take on what must be the most recognised superhero in the world is pretty darn good. 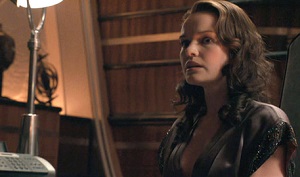 The very production was handicapped from the start, and I’m not talking about the change of directors or the search for the perfect Christopher Reeve look-alike – I’m talking about the fact that Superman has to be the least-interesting super hero that DC Comics have to offer. Sure, he’s one of the first, but really, he’s simply unstoppable until you throw some Kryptonite his way (which you KNOW is always gonna happen), and this is never going to make for a truly thrilling experience.

Keeping that in mind, I’m glad to announce that Superman Returns is probably the best Superman movie that one could make. Singer is a master of the big-budget superhero action scene (the plane bit is an absolute show-stopper), and the film truly manages to convey the overwhelming nature of his strength and the thrill of flying. Strangely enough, this movie has very few action scenes, but during these moments one can truly understand why such a hero would capture the imagination and hopes of the people of Metropolis.

Singer has stayed so close to Richard Donner’s 1978 movie that it’s a little disturbing at first. It even mimics the horribly long opening title sequence of the original, complete with cheesy special effects, and John Ottman’s score works fairly closely within John Williams’ original material. Frustratingly there is no reinvention or even reinvigoration of the Clark Kent/Superman character as we saw with Bruce Wayne in Batman Begins, which means Supes still is a pretty dull guy. Brandon Routh does what’s necessary, but there’s really no chance for him to excel. Kate Bosworth is great as Lois Lane, though she looks way too young for the part, and Frank Langhella and Sam Huntington are perfectly cast as Perry White and Jimmy Olsen respectively. Kevin Spacey makes the most of the Lex Luthor role, though Superman Returns doesn’t really have him doing anything extraordinary – he’s just doing what Luthor does best, with little explanation as to where his lust for power comes from. It’s a pity really that the screenwriters didn’t feel the need to infuse these characters with a little more depth.

Now that the flagging DC has managed to get big budget recreations of their most obvious heroes on the big screen, it would be fantastic if they could get something else up there… (For instance Green Lantern, as long as David Goyer is attached and as long as the Jack Black rumours are just that…) The Vertigo adaptations have been great (ok so Keanu Reeves was a silly choice for the blonde Englishman Constantine) and I’m of the rather extreme opinion that everyone should see V For Vendetta at least twice in their lifetime.

Superman Returns doesn’t have the depth of Batman Begins or the charm of Spider-Man, but makes good use of a super strong dude in a blue, red and yellow wetsuit. It may have gone a little too far in honouring Superman and Superman II, but there’s enough big screen destruction to satisfy the simplest of comic book desires.