What is it about men, anyway? You introduce one into an idyll, and all hell breaks loose… happens everytime. Following this well-worn plotline is Summer in Berlin (Sommer vorm Balkon), which distinguishes itself not through originality, but by the excellence of its performances. 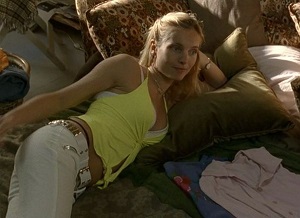 Both Inka Friedrich (Katrin) and Nadja Uhl (Nike) are wonderful in their portrayals of women bordering on middle-age, who just haven’t quite got things right. Katrin is the divorced mother of an almost-teenage son, unemployed and insistent she is thirty nine and a half, not forty. Nike, somewhat younger (but dressing as someone much younger with visible thong and plunging neckline), is a personal care attendant to the frail and demented. Neither is satisfied by their lot in life, and yet both seem to try to do their best. Friedrich is particularly good, demonstrating the frustrations and indignities Katrin must face with a quiet resolve, although one is never sure when the façade will crack, as it surely does. She is fantastic in a subtle performance of great skill. Uhl is also accomplished, particularly in scenes involving her patients – these scenes are always true-to-life in quite an uncomfortable way, and Nike has the right mix of empathy and frustration that makes her reactions to many of the problems that occur in this setting very real. She was similarly excellent in Twin Sisters (De Tweeling).

Their stable (but bordering on maladaptive) world is changed when confronted with truck driver Ronald, played with great humour by Andreas Schmidt. He is at times hilarious, and otherwise simply offensive, and that the audience is left with any empathy with his character is testament to the charm of Schmidt. As often is the case, the introduction of the changing force must result in a positive re-evaluation of the characters’ lives (even if it requires them to first endure several negative experiences), and so it is here. Whilst the crises that strike both women are predictable, they are portrayed in such a way as to wrap the viewer in the emotion – the early scenes are somewhat slow, but these dramatic scenes are well-paced and engrossing.

There are problems with the length of the early expository material, and the subplot involving Katrin’s son Max gets short shrift when perhaps it could have been expanded. Additionally, some of the humour doesn’t quite hit its mark, and whilst it shouldn’t be a criticism of a foreign language film, the English subtitles at times didn’t quite gel with the action onscreen, and this does detract from the experience of viewing it as a non-German speaker.

All that being said, the performances of Freidrich and Uhl are wonderful, and the film doesn’t get bogged down in melancholy or drama, preferring to lift our spirits with an upbeat soundtrack of German pop songs and a reasonably positive, albeit pragmatic, conclusion. Worth watching for the performances.