I’m not sure I can even go into this film in any depth – I’m too angry. 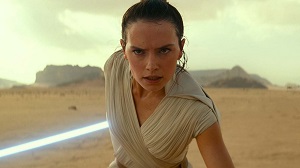 The Rise of Skywalker feels like it was specifically made to appease the group of fans who hated The Last Jedi. Like someone ran through the half dozen plot points that frustrated them the most, then set out to retcon them, one by one. It’s truly astonishing how many things achieved by the last film are undone by the return of J.J. Abrams.

Chief among The Last Jedi’s accomplishments was the notion that we have to move on from the past. Rey (Daisy Ridley) wanted to learn from it and take the next step; Kylo Ren (Adam Driver) simply wanted to kill it. “We are what they grow beyond”, Yoda said. Clearly he wasn’t talking about Episode IX, which has no interest in taking up the opportunity presented at the end of Episode VIII, instead content to retread old ground – even more than The Force Awakens. So expect to see old faces, endless callbacks and rehashed scenes from the original trilogy.

I won’t list the major plot points that infuriated me – to do so would be to spoil the film – but suffice to say, it feels like an apology. Which, historically speaking, is strangely fitting, considering Return of the Jedi was an apology for The Empire Strikes Back (which was not universally well-received at the time, despite what revisionists claim) and The Last Crusade was an apology for Temple of Doom. So yet again – it’s something we’ve seen before with George Lucas’ creations.

J.J. Abrams lets loose with a couple of things that annoyed Star Trek fans back in 2009 and 2013 – namely, messing with what can and can’t be done during faster-than-light travel, and giving his characters power over life and death. Sure, the end of The Last Jedi featured an astonishing show of power, but it also came at a cost. In Rise of Skywalker, Kylo and Rey are flinging the Force around like demigods.

What did I like about this film? Well, this won’t take long. The visuals are stunning, the VFX fantastic. There are some cool new worlds to explore. Most significant of all is the fact that the cast are acting their damn pants off. Despite the awkward exposition, plot contrivances and characters doing random 180s, they carry it off with aplomb. The undisputed hero of this trilogy is Adam Driver, who has consistently sold even the most ridiculous writing in all three of the films. But then there are so many characters that given short shrift. Leia, we can understand. But Lando? Luke? Rose? Finn? Wasted. Even new characters like Jannah (Naomie Ackie) serve little purpose.

So this is how it ends. At best, a constrained act of obeisance…and at worst, a whimpering apology. I’m sad to say that this trilogy will have to remain a two-parter on my Blu-ray shelf.

After all of the hand-wringing and gnashing of teeth, we have finally arrived at the end of the nine-film Star Wars ‘Skywalker saga’. Thank goodness for that…

While I’ll freely admit I’ve never been a fan of the initial trilogy helmed by George Lucas, I can understand that for some fans its a cultural touchstone that holds significant meaning. The second trilogy (The Phantom Menace, Attack of the Clones, Revenge of the Sith), however, was an absolute debacle. I have never been able to understand how those three films were released. (Had they not been prefixed Star Wars: Episode I-III one wonders if they would have made it to the cinema.) 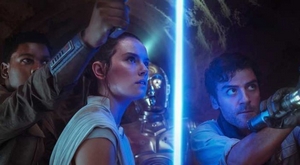 More recently, the final trilogy (The Force Awakens, The Last Jedi and now The Rise of Skywalker) has left the ‘saga’ going out with a whimper rather than a bang. This film is another in the long line of Star Wars films that is best described as ‘a mess’. It appears that J.J. Abrams and co. were more concerned with fan service than creating a coherent ending to this story.

Rey (Daisy Ridley), Poe (Oscar Isaac), Finn (John Boyega) and the rest of the rebels are holed up somewhere in the jungle: Rey struggling to learn the art of being a Jedi and General Leia attempting to guide her. Meanwhile, Kylo Ren (Adam Driver) is discovering that the death of Emperor Palpatine might not mean he is finished, as well as continuing with his internal good vs evil struggle. The eventual (and necessary) showdown between Rey and Kylo Ren will have consequences both for them and the entire galaxy.

There are some sequences that suggest at a film featuring dramatic tension, however they are washed away in the deluge of hyperdrive jumps and ‘wink, wink’ nods to the audience that plague this feature. 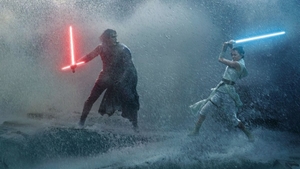 Driver and Ridley perform adequately despite the limiting script, while Isaac is completely wasted as Poe – much as he has been throughout this final trilogy. While I accept that an offer to star as a major character in a Star Wars trilogy would be hard for any actor to turn down, Isaac has done much more interesting work in much more interesting films. What a waste of his talent.

As Stuart mentions, the visual effects are excellent, and the score is effective. The real issue with The Rise of Skywalker is with the execution of the vision. The writing is weak and there are characters seemingly who are introduced only to allow their spin-off movie or tv series to enter development. The film is horrendously overlong as well, another sign that the writers just didn’t know what story they wanted to tell.

One wonders whether sensible fans of Lucas’ original trilogy might simply choose to disregard eps 1-3 and 7-9. Maybe a Jedi Mind Trick would help?

Star Wars: The Rise of Skywalker