This review is terribly overdue, and the film is probably slipping from our local screens right now, but I had to mention The Squid and the Whale cos it could quite possibly creep into the year’s best list. 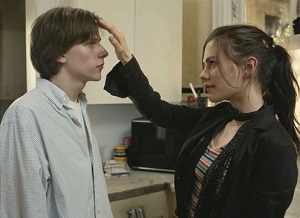 Noah Baumbrach (writer of The Life Aquatic with Steve Zissou) wrote and directed in this delightfully focussed drama centring on the break up of a marriage in the 1980s. He has created a marvellously true to life and rather candid chronicling of a family unit gone wrong. The adults are portrayed by Jeff Daniels (Good Night, and Good Luck) and Laura Linney (P.S.) and their characters are wonderfully flawed – pitting their children against each other and making bad decision after bad decision. But it’s the sons Jesse Eisenberg and Owen Kline that are the central focus of the piece, and the two of them deliver performances well beyond their age. Watching the two kids grapple with their parents’ rude, contradictory and sometimes unforgivable behaviour provides some of the film’s best scenes. You only have to see the father’s (Daniels) horribly misguided and amoral suggestions to his son when the latter comes to him for advice on his love life to see what I mean. The film had me cringing at regular intervals, but in a good way.

Anna Paquin delivers a fine performance also in a supporting role, as does William Baldwin (surprisingly!). Halley Feiffer (a playwright and rather successful stage actress) is superb as well, and also appeared in You Can Count On Me, the first time I took notice of the fantastically talented Laura Linney. I would have liked Feiffer to have more screen time, although understandably she wasn’t to be the main focus of the film.

It’s such dramatic and almost ‘authentic’ pieces like this that remind me that we’ll never run out of good films. The situation is created so lovingly, and the characters are so magnificently complex that one can’t help but love The Squid and the Whale.

The Squid and the Whale