There’s rarely anything as upsetting to a movie-lover as a failed sequel, and in Spider-Man 3, Sam Raimi diminishes much of the success of the second in this series, which stands as one of the truly great comic book adaptations. Dull, bloated, confused and featuring some of the most difficult to watch action sequences of recent years, Spider-Man 3 is profoundly disappointing. Picking up shortly after its predecessor, we find Peter Parker (Tobey Maguire) still deliriously in love with childhood sweetheart Mary Jane Watson (Kirsten Dunst), and continuing his one-spider crusade against the forces of evil in New York City. His (former) best friend Harry (James Franco) still thinks Spidey killed his dad, and there are new villains for him to contend with, in the lives of both Parker and alter-ego Spider-Man. By its end, Spider-Man 3 will have resolved several story arcs, but it is the journey to get there that is the main problem.

Spider-Man 3 is long; really long. Clocking off after 140 minutes, it is simply too long to sustain the energy. Multiple flat spots weaken some of the more interesting sequences, and perhaps too much was undertaken when the decision was made for Spider-Man to have two arch villains to contend with alongside regular nemeses Harry Osborne and J. Jonah Jameson. The cutting from one thread to another is clumsy and awkward, and the story never quite gels to present one cohesive narrative. Perhaps with less to balance, Raimi may have made a shorter, more compact film that could continue to build on the absorbing character work of Spider-Man 2.

The web-slinging heroics of Spider-Man have been the mainstay of the success of the franchise, with audiences thrilling to watch him swinging through the familiar landmarks of New York, and avoiding projectiles and traps with cunning and agility. It is here that Raimi also misfires, with the editing and CGI for some of these sequences distracting and nearly unwatchable. The first mid-air chase sequence featuring New Goblin and Spider-Man fighting in between the densely packed buildings of the city is a good example of how these techniques should never be used – when will Hollywood learn that if audiences are left vertiginous and nauseated, their enjoyment has to be lessened? Moments that are obviously computer animated mixed with rapid cutting and frankly bizarre camera angles mean the fans don’t get what they paid to see… in fact they see barely anything at all. Maguire is adequate as the hero, but doesn’t quite reach the heights of Spider-Man 2, and although he seems to enjoy the chance to add a darker touch to this character, he slightly underperforms as the black-suited Spider-Man/Parker. Dunst is actually asked to act this time around, and is fair without being brilliant. Franco continues to be wooden, and one wonders whether the original decision to cast him will be viewed as a success in retrospect. All the minor characters of the first two films are reprised by their original actors, and although this would normally be considered a good thing, in this case their presence is often superfluous. The two major additions are Thomas Haden Church and Topher Grace, and Grace threatens to steal the entire show in his limited scenes. He continues to impress in a varied career to this stage, with roles in films such as P.S. and In Good Company balancing his villainous turn here.

Disappointing for any fan of the series thus far, Spider-Man 3 contains some interesting moments, but never manages to get itself going. With a spectacular final fight scene only barely making up for some of the other battles being so difficult to watch, it is hard to see anyone enjoying this nearly as much as the second in the series. That it features one of the most blatant and appalling American flag shots in recollection is the final straw.

I was never the rabid fan of number 2 that Mark was, so any failures on the part of number 3 were less of a problem for me. But I can see why it must be such a disappointment. More than ever, the franchise now feels like a kids’ phenomenon. Spider-Man 3 whacks you over the head with the kind of simplicity non-comic book fans think all comics are like, and at times comes dangerously close to Fantastic Four territory.

I happened to see some of Spider-Man 2 yesterday, and darn if that wasn’t a much darker film! By comparison part three comes off as… well, cartoonish. About halfway through it almost becomes a farce. The tagline reads ‘The greatest battle lies within’, but when Peter Parker goes to the Dark Side it’s more like he’s become some jazz devil, strutting down the street in a ridiculously over the top manner decked out like he should be in an emo band. Thank goodness Kirsten Dunst and Bryce Dallas Howard take their jobs seriously, cos whilst Maguire’s got the comedic side down pat, his dramatic skills simply aren’t convincing this time around. 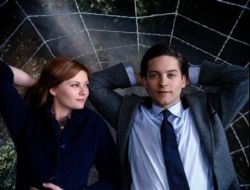 That being said, I do have a soft spot for Dunst, in case no one had noticed, and I’ve been consistently frustrated at the pathetic role Mary Jane always has to play (exactly how many times has she been used as bait now?). The ups and downs of MJ and Peter’s relationship are perhaps the only impressive aspect of the film, though again these ups and downs are rather cartoonish. Bryce Dallas Howard does fine but also deserves better. And simply doesn’t work as a blond…

The film does (of course) suffer from too many bad guys. So few franchises seemed to have learnt that less is more. Batman Begins had several baddies, but didn’t feel the need to do a back story on all of them, which is probably why it succeeded. Thomas Hayden Church is a very buffed up Flint Marko, and his first appearance as Sandman would have to be the best sequence in the film. As Mark said, Topher Grace is great, though we jump to the final act with such a horrid jolt that it’s hard to believe he got to where he was so quickly. Dylan Baker is still hanging around as Dr. Curt Connors, presumably hoping beyond hope that Spider-Man 4 will finally mark the appearance of the Lizard. Finally, I thought James Franco was fine, though the first scene where he and Spidey clash is a horrid CGI and greenscreen mess, reminiscent of the first Harry Potter quidditch match.

In fact the special effects are disappointing once again in Spider-Man 3. The opening shot of our hero slinging his way through New York is just as bad as it was the first and second time round, and the filmmakers’ concepts are consistently beyond their reach.

Not all super-hero movies have to be dark (though it does help!), but Spider-Man 3 is simply too much of a crowd pleasure. The kids will love it and anyone who thinks comics are crap will be vindicated, but if you’re wanting anything deep, or at least absorbing, then you won’t find it here.