Wow! This is so superior to the first installment, it makes you wish more sequels could be so wonderful. From the opening credits until the close, this movie held me enthralled. It is a remarkable achievement, and an absolute blessing in this age of the wholesale whoring of concepts developed in successful first films into rubbish sequels.

Spider-Man seemed a bit of a mess to me, not knowing whether it wanted to be a drama or an action film, and achieving neither with distinction. Spider-Man 2, however, knows exactly what it wants to be, and how to go about achieving that ideal, and is really very brave. Not many directors would have taken the chances Raimi has here – the prolonged section of drama and conflict that marks the mid-section of this film runs the risk of alienating more youthful or thoughtless viewers, but Raimi pushes on and delivers the most developed super-hero character to have graced the screen. We are aware of the internal conflicts that plague Peter Parker, and understanding of the interacting hopes, dreams and desires that drive him. It would have been so much easier to follow The Matrix Reloaded route and just show us more super-hero action and stunts. The choices made by the director were only made possible by a stellar performance by Tobey Maguire. He is excellent, and really does make you feel the impact of the various choices and decisions Parker is forced to make. Maguire plays nuances well, and is able to be believably forceful, and at other times bashful and inhibited. Dunst is passable in a limited role this time around, and Franco does his best as Parker’s best friend and Spidey’s worst enemy.

The CGI is almost without flaw – there are moments of unreality, but generally the graphics are excellent. The image of Doc Ock carrying MJ up the wall of the building is a great example – it looks extremely realistic. Much of Spider-Man’s webslinging looks perfect too, but there are occasional glitches. The sound is fine, and the editing is an excellent example to the idiots responsible for cutting The League of Extraordinary Gentlemen.

I watched this film with my mate Sean, who was so in awe afterwards that he couldn’t speak until we were halfway home, at which point he pronounced it a 12 out of 10! I wouldn’t go quite so far, but this really is an excellent film, a shining light in a sea of mediocre sequels and tired action sequences. Roger Ebert called it “maybe the best superhero film I have ever seen”, and I have to agree. I am racking my brains to think of another with the depth of character, brilliance of direction, or excellence of visual effects, and I am unable to. The Matrix would be the only competitor, and it is one of my top ten all-time! This is an awesome film, that I hope to enjoy again very soon indeed. 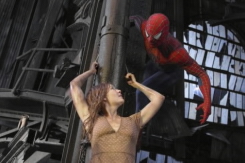 Whenever my views on a particular film differ from the general consensus, a certain co-worker of mine immediately assumes I’m being contrary simply in an attempt to be cool. I’m not. And in fact it should be noted that the same co-worker liked Underworld. (Actually I haven’t heard of a film she actually disliked, so we shall pay no attention to her whatsoever.)

For the last 18 hours or so I’ve been doing my darndest to make sure that my reaction to Spider-Man 2 isn’t due to incredibly high expectations (for instance, Mark’s review, or Roger Ebert’s claim that it’s the best super hero movie ever). After many hours of deliberation I don’t think this is the case.

Frankly, I was disappointed with Spider-Man 2.

I did enjoy the first Spider-Man, and I thought it was a great comic book adaptation. There were some truly great moments in the first film that raised it above the average super hero movie. Tobey Maguire was a fantastic choice for the lead role, and Willem Dafoe was great. But, a balance in all things: there was of course the Green Goblin, looking suspiciously like a Power Rangers villain.

The main problem with Spider-Man 2 is that I don’t feel it took us anywhere new. The first fifteen minutes were terrible, a bad script clumsily getting us up to speed on what’s been going on in the interim. Thankfully that soon passed, but every now again some terrible lines appeared, and unfortunately often during key scenes. I felt there was very little in the way of character development, and that Peter Parker and co. were basically treading water for much of the film. The issues and dilemmas raised were nothing new, in fact many of the big dramatic moments I felt I’d already seen in the first film. 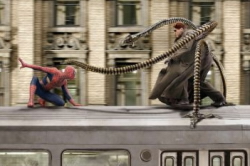 As for the new villain, Dr. Octavius’ story seemed to be an afterthought. I don’t know much about his character in the comic, but surely there must have been more depth to him in the original stories? I thought the Willem Dafoe had a lot more to work with in the first film than Alfred Molina does here.

Once again Raimi has done a good job by not letting the action dominate the film. It’s good to see a lot of time put aside for the drama (however disappointing it may be). The action scenes themselves are good, not great. There’s a lot of CGI in these, and as such it seems a bit like watching a cartoon at times. There’s also a bit too much ‘phantasy physics’ going on for my liking. The action scenes were entertaining but never thrilling. By the way, the studio heads should be severed from their shoulders as punishment for giving away the film’s best scene in the teaser trailer.

The humour is still there, and it was good to see Bruce Campbell in a fantastically funny cameo. Tobey Maguire delivers another great performance, and once again Kirsten Dunst’s talents are wasted in the subsidiary role. Surely they could have given such an important character something interesting to do?

Spider-Man did a great job of setting up an extraordinary super hero in an ordinary world, Spider-Man 2 simply maintained that.

And I’m not being contrary to be cool.