Spartan was reputed to be a ‘return to form for David Mamet’, with Mamet being described as ‘a magician who uses words instead of cards… who gets you all involved in his story about the King, the Queen and the Jack, while the whole point is that there’s a rabbit in your pocket’. I didn’t agree that it was so wonderful, but it was gripping and thrilling, and did feature some good performances, not least from Val Kilmer. Val doesn’t excite me much anymore… not since Heat in 1995 have I enjoyed his work – he has made some poor choices (Red Planet), reportedly has behaved badly (The Island of Dr. Moreau), and he has fallen off my radar. Couple this with the spartan advertising Spartan has had on its release here in Oz, and it’s a surprise I went to see this at all.

In this film, however, Kilmer is cool. Quiet, threatening, foreboding… like a coiled spring, waiting to be released. The times we see this release are exciting and thrilling, and the intervening periods hold the promise of what is to come. He really does do an excellent job. His co-stars include Ed O’Neill and William H. Macy, neither of whom are allowed to be much more than bit players. Texada and Luke play Kilmer’s sidekicks, and, again, they are dwarfed by the presence of Kilmer, written and directed to be the only focus.

Without spoilerising the issue, there is an extremely odd moment at the very end, which I can’t for the life of me explain. Why does Kilmer react to the death of one character in one way, and another in a vastly different way? What is the difference as he sees it? Kilmer’s motivations and emotional attachments are so poorly explained, that at times he seems overly harsh and self-focused, whilst at others he is allowed to wallow in pity and grief. I don’t mean this as a criticism of Kilmer himself, more the writing and direction.

Spartan is a quiet drama, with thrills and twists to sate a non-critical viewer on a cold night at home with a DVD. Don’t expect more.

Wow. I was really impressed with Spartan.

I haven’t seen that much of David Mamet’s work. In fact I think the only film of his I am familiar with is The Spanish Prisoner, and I’m not even sure if I’ve seen it. The Spanish Prisoner was showing back when I worked in a cinema, and along with many other films during that three year period (The English Patient, Welcome To Sarajevo), I saw the beginning and ending of that film over and over, to the extent that I’m not sure if I’ve actually sat through the whole thing or not. 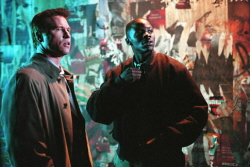 Anyways, Spartan is an intelligent and involving thriller. Similar in some ways to The Manchurian Candidate, this is a thriller that calmly lays out the twists and turns without fanfare, meekly presenting an exciting mystery.

It’s refreshing to see Kilmer in a decent film finally (The Salton Sea was closer than his previous work to being good, but not quite), and he does admirably in a role that doesn’t blatantly spurt out philosophical or moral beliefs.

Spartan is clever because you constantly have no idea which direction the film is going to take. They may spend 10 minutes preparing you for what is to come, and then suddenly turn the plot upside down before taking you along a completely different path.

Mamet seems to be one of those directors that has stars falling over themselves to be involved with (much like Woody Allen), and thus we have William H. Macy and Ed O’Neill in roles that don’t really have much depth. Kick Gurry also seems to be very out of place in this film.

A great, intelligent thriller that surprises you without showing off.