I could have quite happily cut the first half hour and the last fifteen minutes from The Spanish Apartment. I found the beginning very sluggish and at the same time disorienting; and as a consequence I had prepared myself for an average film. I didn’t like the main character much either, which is a problem since we’re required to sympathise with his story. He was simply boring.

But this film simply takes a little while to warm up. Once we actually get to the Spanish apartment the film is simmering nicely. (See? I’m clever! I can do cooking metaphors!) We are introduced to a wonderful line up of characters, and the plot is then in full swing. 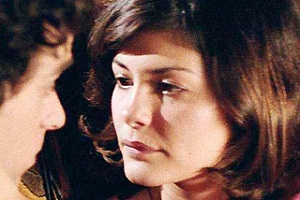 This film is filled with gorgeous guys and gals (like a vast field of tulips, sunflowers and roses all in bloom at once… crap… ok, so the flower metaphors aren’t going so well…), and the group of young people in the apartment itself are no exception. They are perfectly cast, and surely must have spent a lot of time together before filming began, because they bounce off each other wonderfully.

The Spanish Apartment also serves as a splendid language comedy. As each of the characters has a different native tongue, their interaction is at times wonderfully hilarious. In fact I had a hard time concentrating in The Crimson Rivers a week later due to learning the French word for university. I can’t think of any other films that deal with language so adeptly or humorously as The Spanish Apartment.

By the time we got to the end of the film I was yelling at it to hurry up. Once again it plodded along like the suspect in that ‘Get Smart’ episode (‘Sort of a clip-clop’). When it finally got around to the conclusion it was the one I had anticipated for much of the film anyway.

The Spanish Apartment is close to brilliant at times, but sometimes clumsy and awkward. Thankfully the main bulk of the film (the bit in the centre) is great. (Note: I did my best to not include a chocolate metaphor in the last sentence, aren’t you glad? It would have been something about yummy and gooey caramel centres, I’m sure.)